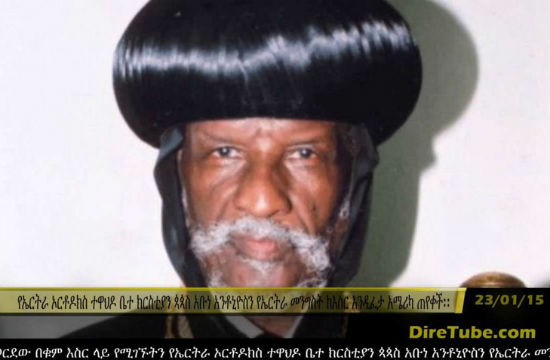 La Croix International (24.07.2019) – https://bit.ly/2K68cvO – Relations between the Eritrean government and Christian churches continue to deteriorate. This time, it is the Orthodox Patriarch himself, 90-year-old Abune Antonios, who has paid the price.

The Orthodox Church’s website OCP Media Network reported that he had been “blindly accused of heresy” by “a group of bishops” and even “excluded from its Church.”

“This initiative is part of the Eritrean government’s ongoing authoritarian propaganda programs,” says the Orthodox news agency, which points out that Patriarch Antonios had been “under house arrest since 2007” after being “dismissed by the government while taking a firm stand against its interference in Church affairs.”

According to the BBC, the decision was taken by “five of the country’s six most powerful bishops,” including Bishop Lukas, the Secretary of the Holy Synod. “We don’t know why one signature is missing,” the British broadcaster remarked.

A most authoritarian regime

Since its independence, won in a fierce struggle against Ethiopia in 1991, Eritrea has been under the control of President Issayas Afeworki, a 68-year-old former engineer known to have imprisoned without trial even his closest friends.

Patriarch Antonios is one of the countless victims of this most authoritarian regime in the world, often compared to North Korea.

Its Church is an autocephalous Eastern Church, which separated from the Church of Ethiopia when Eritrea’s independence was proclaimed in 1993.

Antonios, its first patriarch, was consecrated by the Coptic Orthodox Patriarch Shenouda III of Alexandria in 1994, before being deposed in 2005, under pressure from the government. The seat remained vacant for almost two years.

In 2007, the authorities imposed a successor on the Holy Synod, layman Yoftahe Dimetros known as Abune Dioscoros, causing serious difficulties: he was not recognized by some of the faithful, nor by the other Churches.

In 2017, the tenth year of Abune Antonios’ imprisonment, diplomatic pressure from France, the European Union, Canada, the United Kingdom and the United States combined to secure his release.

To everyone’s surprise he appeared in public on Sunday, July 16, 2017 and alongside about 100 faithful, he participated in a Mass at St. Mary’s Cathedral in Asmara.

A reassuring statement was read during the Mass and posted on the website of the Orthodox Church of Eritrea. Very briefly, it stated that “after many efforts undertaken by the Union of Monasteries and Scientists of the Orthodox Church of Eritrea, the problem of Patriarch Abune Antonios III has been resolved,” and that the united Holy Synod had concluded a “full and complete reconciliation” with him.

In reality, it was only propaganda on the regime’s part. The patriarch, who was surrounded by guards throughout the Mass, was again placed under house arrest immediately after this furtive public appearance.

And the pressure on the Orthodox Church has continued.

According to Christian Solidarity Worldwide, which closely and regularly monitors the situation in Eritrea, the patriarch, who is seriously diabetic and suffers from high blood pressure, described – in a video taken out of the country clandestinely in April – his living conditions, without care and in the “servants’ home” of a villa inhabited by Bishop Lukas.

In their letter announcing his expulsion, the five bishops affirmed that “his recent activities” had led them to conclude that “his repentance was not authentic.”

“His name should never be mentioned or remembered again and those who do will be severely punished,” their letter added.

For the Orthodox website OCP Media Network, all this is a sign of political control over the Church of Eritrea. Its leaders have therefore chosen to maintain their trust in Abune Antonios, who “is still the canonical patriarch of Eritrea, recognized by the Orthodox and the rest of the Christian world.”

Evangelical Eritrean Helen Berhane is one of 27 people “who suffered for their faith” and was received July 21 by President Donald Trump as part of his 2nd Conference for Religious Freedom.

Now a refugee in Denmark, the young woman drew attention to “the tragic fate of the patriarch, whom she named, and other church leaders imprisoned without charge,” CSW reports.

In his speech, US Vice President Mike Pence called for the release of Abune Antonios, “who has been under house arrest for twelve years now, because he refuses to excommunicate members of his Church who criticize the government.”

The country’s small Catholic Church has also been in the sights of the authorities since the publication, in 2015, of a courageous pastoral letter entitled “What have you done with your brother?” which warned against the continued emigration of the country’s vital people.

In June “people sent by the State – from the army, the police and the health sectors – came forward to demand the surrender of the Catholic Church’s health infrastructure,” the bishops complained to the Minister of Health.

When the Catholic hospital and clinic officials refused to sign the surrender documents presented, government officials closed the center and evacuated its patients.