EGYPT: The public spectacle of a slain Coptic priest 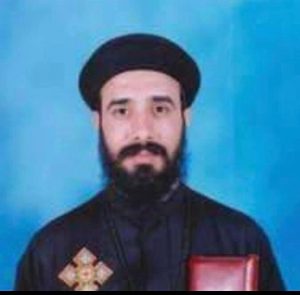 Blood dripped down his face into his long, black beard. Dirt discoloured his flowing black robe. His cross pendant rested peacefully on his chest, eerily imitated in the cross-like stabbing etched into his forehead.

Many details remain unknown, but early indications point to extremism. Fr. Shehata was from Beni Suef, visiting a family in Cairo 150 kilometres north in a lower-class, urban suburb of Cairo.

It may well be he was targeted only for the clothes he was wearing – in Egypt a clear indication of his religious profession.

He was left a public spectacle. (Reports say the ambulance service did not arrive for over an hour.)

So far, no claim of responsibility, no message of intention. There are possible hints circulating of mental instability on the part of the attacker.

Perhaps. Murder is rare in Egypt. Despite the increased terrorism suffered by Copts in recent years, this killing is unusual. There is a chance it was random.

But few think so. Coptic social media immediately proclaimed Fr. Shehata a martyr, adding him to the growing scroll.

The image, however, may have lasting effect, reinforcing a decades-old message: the streets are not a place for priests. 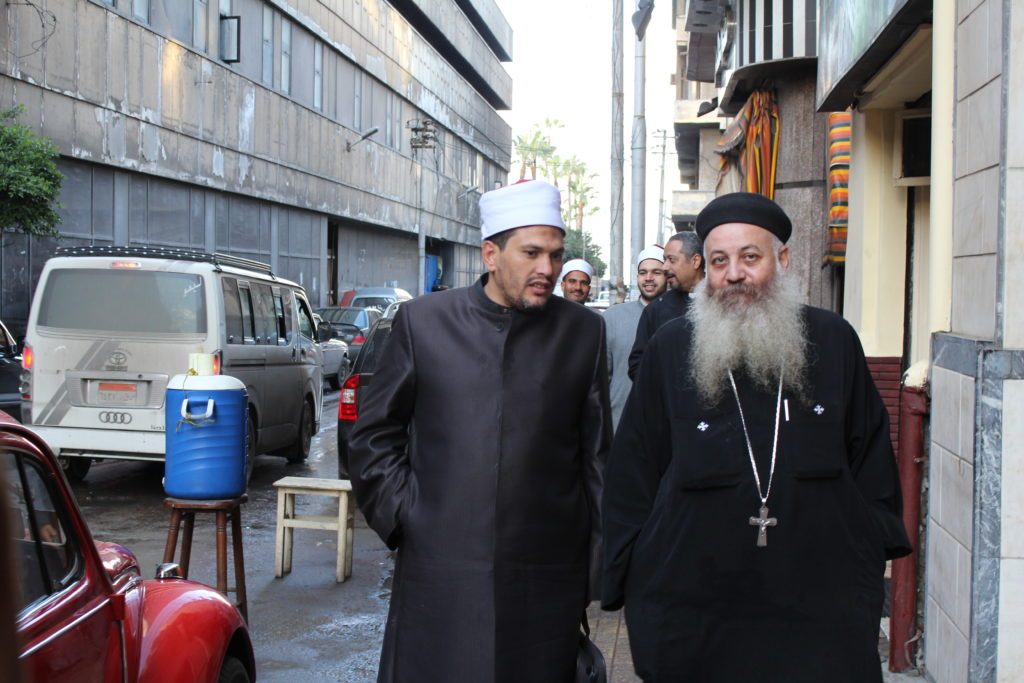 An imam and a Coptic priest walk side by side. (Jayson Casper)

Coptic Bishop Angaelos of the United Kingdom held the requisite forgiveness to the end of his statement, pouring out instead his frustration and anger.

“Why should a priest not be able to walk safely down a street?” he demanded. “Coptic Christians who have endured injustice, persecution, and loss of life for centuries without retaliation, repeatedly forgiving unconditionally, deserve to live with respect and dignity in their indigenous homeland.”

Samuel Tadros, a Coptic-American analyst, took to Twitter to highlight the social reality.

“This may be a horrific crime but it does not happen in a vacuum,” he wrote. “Coptic priests are insulted and harassed daily as they walk in Egypt[ian] streets.”

Respect. Dignity. Insult. Harassment. What is the way forward? The answer may lie partially in the clothes that sparked the assault.

Better law enforcement is necessary. Education must be reformed. These are the standard answers offered, and there is logic to them. But if they are not going to change anytime soon, what are Copts to do in the meantime?

Years ago I met my first Coptic priest in America, and I asked him about his beard and robe. They are tradition, he explained, but they are so much more.

To a degree, they are public spectacle.

Protestant pastors often blend into society. Catholic priests sometimes take off their vestments. But the Coptic Orthodox clergyman must look distinctive at all times. He is a sign of the Church, a message to the people that God’s kingdom is near.

But in recent decades in Egypt, that kingdom has become less and less visible.

Let no-one think that the nation is aflame. Muslims and Christians are neighbours and friends. Sectarianism is an ever-latent virus poisoning many, but for the most part life goes on amid patterns of discrimination and identity groupings.

But facing a growing Muslim – often Islamist – domination of the public square, especially before the revolution, Copts have increasingly withdrawn into their churches.

Who can blame them? Spitting is real. Priests travel for visitation in cars with tinted windows. Why not, if the money is there? Egypt drives everywhere these days, just look at the traffic.

But money is also a demarcating line. A priest can shop comfortably in the hypermarkets of upper-class Cairo. Will he buy vegetables off a donkey cart in poor Upper Egypt?

Perhaps this murder is a reminder that he must. Otherwise he cedes the public square completely.

Courage is necessary. Conviction. A certainty his service is not only for Christians, but ‘salt and light’ in the stability of his nation. Kingdom of God or not, Egypt, as every society, is only as strong as its minority members.

So let Coptic priests go and find friends. Invite the local imam for a stroll. Have a tea in the corner coffee shop. Circulate together. Purposefully.

Much in Egypt is centralised, and institutions can be nervous. But who can oppose it? National unity is state discourse. The Azhar would esteem. But why wait for official endorsement? Just go and ask the imam already visited on holidays. Can he refuse?

Let this not be naïve. National unity is often perceived as a grudging obligation for public perception. Many hearts – on both sides – are not pure.

And there is another risk. This must not be about ‘protection’. An interpretation of Islam holds that Muslims must guard over the Christians in their society. It can be a noble intention; it can also be at odds with citizenship. The priest must seek no favours, only partnership in society.

But let him be a public spectacle. This is your neighbourhood. Your country. Your fellow Egyptian. Your friend. Teach together.

It is also your gospel. Christians believe Jesus disarmed the evil spiritual powers of sin and disunity, making a public spectacle of them on the cross.

To preach this message, St. Paul and the apostles became public spectacles on display, as ‘fools’ for Christ condemned to die.

But this is not a fool’s errand. There is even an institution dedicated to the effort. The Egyptian Family House has walked priests and imams in the streets before. Children crowded around and celebrated. Adults took selfies.

Let the cynicism come; all too often it is justified. But let the heart be pure and fight through it with love and solidarity. And courage. Let no-one pretend there will not be another extremist.

Fr. Shehata died dishonourably in one of the most populated areas of Cairo. Soon his idealised image will circulate with the crown of martyrdom. But which picture will hold in the mind of Copts?

A priest belongs on the streets, like any Egyptian. May he choose wisely.