Flight of families to Ismailia follows warning of attacks by ISIL and murders targeting community in El Arish.

Al Jazeera (26.02.2017) – http://bit.ly/2munEFd – Hundreds of members of Egypt’s Coptic Christian minority have fled the Sinai Peninsula to Ismailia city, 115km northeast of the capital Cairo, following a series of killings by a local armed group.

The assailants have shot and killed at least seven Christians in separate attacks in Sinai’s El Arish city in February.

At least 90 families have reached the Ismailia governorate, according to an official of the Coptic Orthodox Church.

“The government helped find housing for some families and we rented apartments for the rest,” Father Kyrillos Ibrahim told DPA news agency from Ismailia on Sunday.

Each of the 90 families includes on average five members, according to him.

“It is hard to estimate if there will be more families coming, it depends how bad the situation is. We hope this is a temporary situation,” Ibrahim said.

Luggage, boxes of food and newly displaced people were arriving throughout Sunday at Ismailia’s main youth hostel where authorities have put up 45 families.

Many rights activists say the displacement is a clear sign the government of President Abdel Fattah el-Sisi has failed to provide a minimum of security for Sinai’s Coptic Christians.

The government only agreed to put up the fleeing Christians in government housing in Ismailia after pressure on social media, which they underline as another disturbing sign.

Nabil Shukrallah of Ismailia’s Evangelical Church said the families arrive scared and in need of supplies, which are being stockpiled at the church via donations from several parishes. 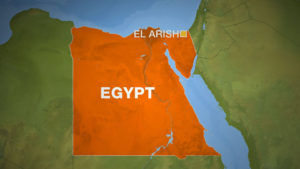 They are then transported to be housed in and around the city, in private homes and, now, also accommodation provided by the government.

“They’re exhausted, with urgent needs for food and children’s clothing,” he said, as one father carried off a sick infant to be evacuated by ambulance.

“They’re terrified of the violence and brutality of the terrorists.”

The flight from Sinai has intensified after the Islamic State of Iraq and the Levant (ISIL) group released a video last week threatening to carry out attacks against Christians in Egypt.

It described Christians as “infidels” empowering the West against Muslims.

The area’s few Christians had been trickling out but the departures picked up after fighters killed a Christian plumber at home in front of his family on Thursday in El Arish.

No group has claimed responsibility for the attack. But Egypt’s ISIL affiliate is based in north Sinai and in December carried out a suicide bombing against a Cairo church.

The Cairo church bombing and the recent killings point to a shift in ISIL’s tactics in Egypt, with the group now also attacking Christian targets that are less well protected than military installations.

Before Egypt’s 2011 Arab Spring uprising, about 5,000 Christians lived in northern Sinai, but the number has since dwindled to fewer than 1,000, say priests and residents.

Egypt does not keep official statistics on the number of Christians in cities or across the country.