EGYPT: Attacks on Copts in Sinai ‘a message from ISIL’

The state’s ‘war on terrorism’ in Sinai has proved unsuccessful, say analysts. 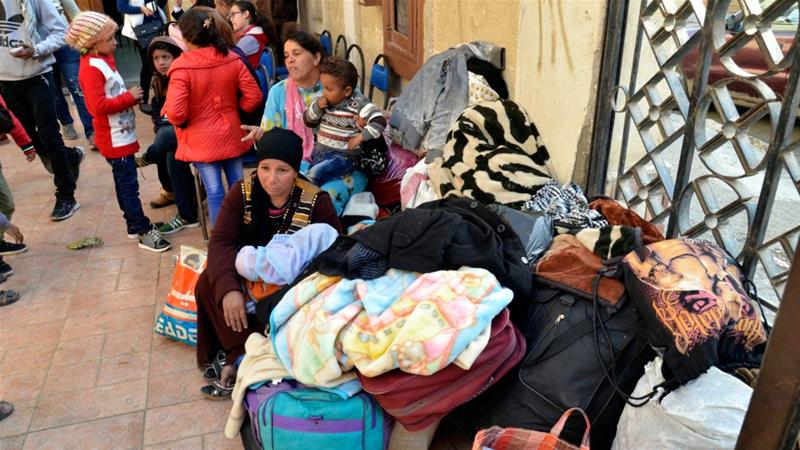 Al Jazeera (01.03.2017) – http://bit.ly/2lWiO3I – The latest string of attacks in northern Sinai’s El Arish against Coptic Christians were indirect attempts by armed groups to undermine the government, according to Egyptian experts and analysts.

Hundreds of Copts fled their homes last week after seven Copts were killed over a span of 21 days, in deadly shooting and arson attacks. An estimated 150 families – more than 400 people – began arriving at the Suez Canal city of Ismailia, the closest to El Arish, seeking refuge in the Evangelical church on Thursday.

The recent incidents have shed light and raised questions about the lack of security for residents, particularly minorities, in the peninsula. Mina Thabet, a researcher at the Egyptian Commission for Rights and Freedoms, a local non-governmental organisation, described the incident as an “exodus”.

“People have no sense of safety whatsoever, they’ve been struck with panic and are still processing the events that have been taking place,” Thabet told Al Jazeera, adding that more families were expected to flee in the coming days.

Although there has been no immediate claim of responsibility for the attacks, fighters affiliated with the Islamic State of Iraq and the Levant (ISIL, also known as ISIS) group based in the Sinai province released a video on February 19, vowing to increase attacks against the Coptic Christian minority, inciting fear among the community.

The Sinai Peninsula, a volatile desert region that is split into two governorates, north and south, has been a hotbed for various armed groups. Thabet said that public outrage at the attacks emphasised the need for a national strategy to help fight “terrorism” in the country, in steps that should be prompted by civil society groups.

“The vast majority of the Egyptian population is not impacted by the activity in Sinai, so it is easy for the central government to ignore – either because they aren’t able to address the growing violence there or because they don’t want to”

In 2014, following a deadly suicide bombing that left 31 soldiers killed, President Abdel Fattah el-Sisi declared a state of emergency in the peninsula describing it as a “nesting ground for terrorism and terrorists”.

But for the 150 displaced families, the state’s vow to fight “terrorism” and end the frequent attacks has proved unsuccessful.

The fleeing families’ testimonies, said Thabet, indicate that they have been feeling unsafe ever since Sisi ousted former President Mohamed Morsi of the Muslim Brotherhood back in 2013.

While Coptic Christians have been eminent supporters of Sisi, according to testimonies made to local media, families are now wondering why the government remains silent, and why it is unable to protect them.

A widowed woman who lost her husband to an attack in January, told the local Al-Bedaiah news outlet: “Is this what has come of our country? The country my husband told me was dear? Where is the army that my husband left me and his children to serve?”

According to Thabet, Egypt’s ministry of social solidarity told the community the current situation was “temporary”.

In a statement made on Friday, the Coptic Church in Egypt condemned the attacks and referred to them as “acts of terrorism … exported to Egypt from abroad”, aimed at “striking our national unity”.

Speaking to Al Jazeera, a Cairo-based journalist and researcher on minority groups, who asked to remain anonymous for security reasons, described the church’s position as “weak and lenient”.

“They failed to confront the situation and address the attacks in a direct manner,” he said. “People expected the church to have a stronger stance.”

This is not the first time Coptic Christians fled Sinai in fear of persecution. Waves of displacement have taken place in recent years, especially since a church in Rafah, a town near El Arish, was robbed and attacked several times in 2012. According to the researcher, there has long been an “undeniable” environment of discrimination against the minority.

But Sinai, following the Egyptian uprising in 2011, has witnessed widespread violence targeting not only Copts, but also police and military personnel. In July 2015, ISIL affiliates were able to simultaneously attack multiple security and military targets, killing at least 35 people in posts located in various parts of Sinai, including El Arish and Sheikh Zuweid.

Earlier this year, a truck bomb attack and a shooting killed at least 13 people.

The constant violence on the peninsula has led to the displacement of 30,000 families, who fled Rafah, Sheikh Zuweid, and El Arish over the past two years, parliamentarian Ibrahim Abu Sahrarah of northern Sinai said in a recent televised appearance.

“I met displaced people whose families were residents of El Arish for more than 100 years – it’s all they know,” the researcher said, adding that targeting the “weak” minority is easier for the armed groups.

Through the attacks, he said, ISIL affiliates are sending a message to the state, telling them that they were successful in “changing the demographic makeup” of Sinai, which brings them a step closer to their objective of controlling territory in Egypt.

“They want to hurt the security apparatus, and one way of doing so is to have people say we are no longer provided with safety from our government”.

Similarly, Samer Shehata, a specialist in Egyptian politics, told Al Jazeera that Copts were “softer targets” for armed groups in Sinai. Prior to the latest wave of attacks, said Shehata, the state’s military and security personnel were the “preferred choice” for such groups.

“The primary target of the attacks is the Egyptian state and its ability to provide security for its citizens,” he said, adding it was difficult to know whether the attacks were politically or religiously motivated.

Shehata characterised Sinai as an area that lacks the full control of the state, “particularly around the Gaza Strip [bordering Rafah], but most likely also other remote spaces in the interior”.

Egypt’s most active armed group, calling itself the Province of Sinai, pledged allegiance to ISIL in 2014. It was previously known as Ansar Beit al-Maqdis. The group was formed during the security vacuum that followed the January 25 popular uprising in 2011 and has claimed numerous assaults on military personnel.

According to analysts, Egypt has treated Sinai as a threat ever since Israeli forces withdrew from the peninsula in 1982. Sinai inhabitants, including Egyptian Bedouins, have been marginalised socially, politically, and economically as a result of the threat the region poses to Egyptian security forces.

Egyptian Bedouins are seen by security forces as potential “terrorists” as opposed to full Egyptian citizens – rendering the region as underdeveloped and thus, fragile, according to Omar Ashour, an expert on Islamist movements.

But the recent wave of attacks, says one analyst, indicate that Copts are being targeted based on their religious affiliation. Sarah Yerkes, non-resident Brookings Fellow and MENA expert, told Al Jazeera that ISIL affiliates commonly target non-Muslims, and perceive Egypt’s Copts as strong allies and supporters of Sisi.

“The Sinai peninsula is notoriously hard to govern and has been overrun by various armed groups,” she said, adding that Sinai is home to armed groups due to the size of its territory, and also because it is “physically removed from Cairo”. “What happens in Sinai tends to stay in Sinai,” Yerkes said.

“The vast majority of the Egyptian population is not impacted by the activity in Sinai, so it is easy for the central government to ignore – either because they aren’t able to address the growing violence there or because they don’t want to.”