The Kokkinakis case is a landmark judgment and a pilot case of the European Court of Human Rights. In 1993, it was the first religious freedom case with which the European Court was confronted. Its decision endorsing the fundamental right to share one’s beliefs with others concerned not only Greece but all the 47 member states of the Council of Europe and their populations, around 820 million people in all. However, beyond the case, there was a man… 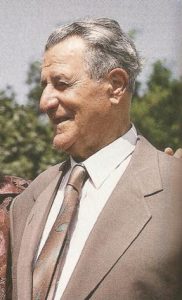 Beyond the court case, there was a man

I had the privilege to know Minos Kokkinakis. I met him in his apartment in Crete for an interview, I publicized his case during the lengthy proceedings in Strasbourg and I organized a press conference with him in Brussels. He was interviewed by the national Belgian television for the evening TV news and despite his age (84), he captivated the interviewer with his energy and his passion for the defence of his rights. He was a charismatic fighter for justice.

Mr Minos Kokkinakis (1909-1999), a retired shopkeeper of Greek nationality, was born into an Orthodox family at Sitia (Crete) in 1909. After becoming a Jehovah’s Witness in 1936, he was arrested more than 60 times for proselytism. He was also interned and imprisoned on several occasions.

The periods of internment, which were ordered by the administrative authorities on the grounds of his activities in religious matters, were spent on various islands in the Aegean Sea (Amorgos, Milos, Makronisos…).

During the German occupation in WWII, in 1941, he was arrested as a conscientious objector. He could have been executed for that but he had a deeply rooted belief that God had prevented him, and the other Christians, from killing human beings. He was ready to die for that.

In his lifetime, Mr. Kokkinakis served a cumulative total of more than six years in prison.

On 2 March 1986 he and his wife called at the home of Mrs Kyriakaki in Sitia and engaged in a discussion with her. Mrs Kyriakaki’s husband, who was the cantor at a local Orthodox church, informed the police, who arrested Mr and Mrs Kokkinakis and took them to the local police station, where they spent the night of 2-3 March 1986.

He ultimately appealed his last conviction to the ECtHR. The court issued its decision on 25 May 1993 in his favor, stating that the Greek government had breached Article 9 of the ECHR (freedom of religion).

More than ever, this case is bearing fruit, especially in post-Soviet countries where the right to share one’s beliefs is more and more restricted, and criminalized. His case is a beacon in the night for all the lawyers who defend the right of believers, whatever their religion, to share their beliefs with others.

The current drama is that more and more illiberal governments in the CoE space and beyond turn a blind eye to that “disturbing court decision” and combat it in law and in practice.

Minos Kokkinakis and his wife were prosecuted under section 4 of Law no. 1363/1938 making proselytism an offence. This law, which was adopted during the dictatorship of Metaxas (1936-40), was exclusively used to protect the Orthodox Church and was in force for more than 45 years.

“1. Anyone engaging in proselytism shall be liable to imprisonment and a fine of between 1,000 and 50,000 drachmas; he shall, moreover, be subject to police supervision for a period of between six months and one year to be fixed by the court when convicting the offender.

The term of imprisonment may not be commuted to a fine.

More than ever, the Kokkinakis case is bearing fruit, especially in post-Soviet countries where the right to proselytize is more and more restricted, and criminalized. His case is a beacon in the night for all the lawyers who have defend the right of believers, whatever their religion, to share their beliefs with others.

The drama is that more and more illiberal governments in the CoE space and beyond turn a blind eye to that “disturbing court decision” and combat it in law and in practice.

Greek Dictator Metaxas’ spirit is back

Unfortunately, the evil spirit of Dictator Metaxas is back on the European continent…

In April 2017, Russia banned the movement of Jehovah’s Witnesses as extremist (!). Its 350 congregations and its headquarters have been declared illegal and their properties have been confiscated by the state. The 175,000 Jehovah’s Witnesses in Russia may not exercise their freedom of religion anymore, and if they do they are prosecuted. Six of them have been in custody for several months, including a Danish citizen living in Russia with his wife and their children. He has been behind bars for 1 year and is currently being tried. (See the upcoming issue of Newsweek: http://www.newsweek.com/jehovahs-witnesses-939860 and HRWF Database of FORB Prisoners at https://hrwf.eu/forb/forb-and-blasphemy-prisoners-list/)

Metaxas’ anti-proselytism laws have risen from the ashes in Russia under the name of the “Varovaya laws”. They are applied in practice to members of non-Orthodox religions: not only to Jehovah’s Witnesses are being prosecuted but also Protestants now.