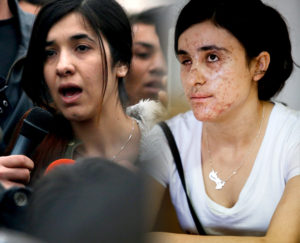 Yazidi survivors and public advocates Nadia Murad and Lamiya Aji Bashar are this year’s joint laureates of the European Parliament Sakharov Prize for Freedom of Thought, following a decision by Parliament President Martin Schulz and the political group leaders on 27 October. The Sakharov award ceremony will be held in Strasbourg on 14 December.

European Parliament News (27.10.2016) – http://bit.ly/2ePrE0a – By awarding the prize to Nadia Murad and Lamiya Aji Bashar “we are demonstrating that their fight has not been in vain and that we are prepared to step up to the plate to help them in their fight against the hardship and brutality perpetrated by this so-called Islamic state to which so many people are still exposed to,” Schulz said speaking in plenary. “They were able to flee, to escape to Europe and find sanctuary here,” he added.

Nadia Murad Basee Taha and Lamiya Aji Bashar are survivors of sexual enslavement by Islamic State (IS) and have become spokespersons for women afflicted by the terrorist group’s campaign of sexual violence. They are also public advocates for the Yazidi community in Iraq, a religious minority that has been the subject of a genocidal campaign by IS militants.

In November 2014, Murad managed to escape with the help of a neighbouring family who smuggled her out of the IS-controlled area, allowing her to make her way to a refugee camp in Northern Iraq and then to Germany. A year later in December 2015, Murad addressed the UN Security Council’s first-ever session on human trafficking with a powerful speech about her experience. In September 2016, she became the first UNODC Goodwill Ambassador for the Dignity of Survivors of Human Trafficking, participating in global and local advocacy initiatives to raise awareness around the plight of the countless victims of trafficking.

Aji Bashar tried to flee several times before finally escaping in April with the help of her family, who paid local smugglers. While fleeing, a landmine exploded, killing two of her acquaintances while leaving her injured and almost blind. She managed to escape and was eventually sent for medical treatment in Germany, where she was reunited with her surviving siblings. Since her recovery Aji Bashar has been active in raising awareness of the plight of the Yazidi community and continues to help women and children who were victims of IS enslavement and atrocities.

Murad and Aji Bashar were nominated by S&D and ALDE.

Murad and Aji Bashar were among the three finalists for the 2016 Sakharov Prize. Find out more about the other finalists Can Dündar and the defenders of freedom of thought and expression in Turkey as well as Mustafa Dzhemilev here.

More on the Sakharov Prize

The Sakharov Prize for Freedom of Thought is awarded each year by the European Parliament. It was set up in 1988 to honour individuals and organisations defending human rights and fundamental freedoms. The prize is accompanied by an award of €50,000. Last year the prize was awarded to Raif Badawi.

Nominations for the Sakharov Prize can be made by political groups or by at least 40 MEPs. Based on the nominations, the foreign affairs committee, chaired by Elmar Brok, and the development committee, chaired by Linda McAvan, vote on a shortlist of three finalists. After that the Conference of Presidents, made up of the Parliament President and the leaders of the political groups, select the winner.