Excerpt from Willy Fautré’ paper “Coercive Change of Religion in South Korea: The Case of the Shincheonji Church” published in the Journal of Cesnur

HRWF (16.05.2020) – As a member state of the United Nations, the Republic of Korea has committed to abide by the ICCPR. Therefore, the authorities are bound to enforce the prohibition of any form of coercion intended to force followers of religious denominations to recant their faith, but the reality is different. In South Korea, adults converting to a new religious movement (NRM) are kidnapped by their families and forcefully confined for weeks and even months to be submitted to a de-conversion program carried out by fundamentalist Protestants. This is what scholars of religious studies call “deprogramming.”

The phenomenon of coercive change of religion in South Korea is exclusively carried out by fundamentalist Protestant Churches associated with the CCCK. Their victims are primarily, although not exclusively, members of the Shincheonji Church, hereafter referred to as Shincheonji.

Shincheonji is an NRM that stems from Protestantism but has developed its own theology (Introvigne 2019), like several other movements, which gravitate on the fringe of the Protestant family.

Statistics about the extent of this phenomenon are non-existent. The only available numbers are those of known victims who escaped from their confinement and de-conversion program or confirmed their beliefs in Shincheonji after pretending to be de-converted to escape.

Shincheonji has collected their testimonies over the years, but it is very likely that there are many victims of kidnapping and confinement for the purpose of forceful change of religion who have never been identified. The infographic that follows was published by Shincheonji. The numbers represent the victims who could not be de-converted. The total number of victims, which should also include “successfully” de-converted individuals, must be much higher than what is currently known. 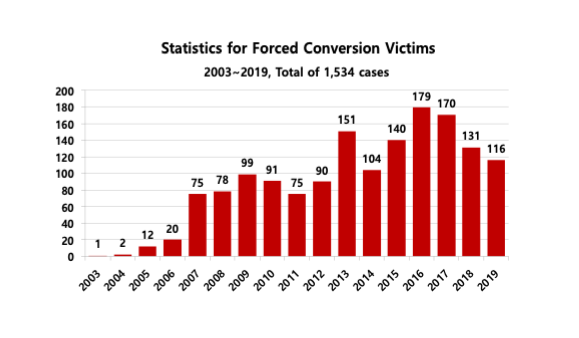 According to an analysis of statistics provided by Shincheonji to HRWF, the main victims of this practice are young women in their 20s (77%), while young men of the same age group only account for 23%. The rates of coercive de-conversion are much lower for older people: 10% for thirty-year-olds, 5% if they are in their 40’s or 50’s and 2% for sixty-year-olds.

The consequences of this practice are dire. These kidnappings and confinements for forced de-conversion have resulted in two deaths, thirteen admittances to psychiatric institutions, and forty-three divorces.

I personally interviewed a number of these victims and their relatives in 2019. A dozen cases were published in March 2020 as part of a 60-page report titled Coercive Change of Religion in South Korea (Fautré 2020), published by Human Rights Without Frontiers (HRWF).