The head teacher of an unregistered Islamic school, prosecuted for operating illegally, has said it has a “unique” approach and will remain open. 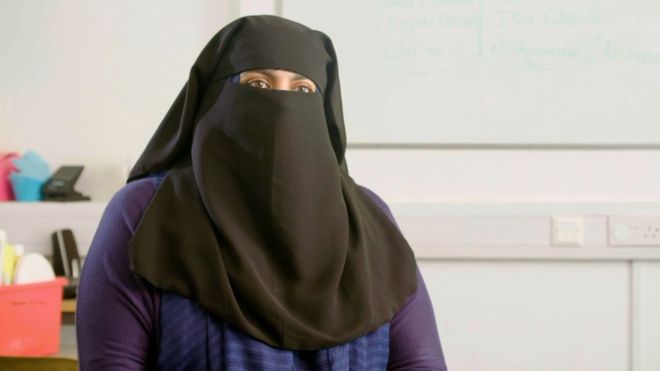 Ms Ali does not usually wear a niqab but said she wanted to keep a low profile for her interview.

She called the pupils “happy learners” and denied it was breaking the law, as it was now open 18 hours a week only.

Ofsted has urged improved legislation to deal with unregistered schools.

By law, any institution with more than five full-time pupils has to be officially registered and inspected. Government guidance defines full-time education as more than 18 hours a week.

The south London school, which describes itself as having an Islamic ethos, says it charges £2,500 a year per pupil and had 45 children on the roll at the time of its last inspection. But it has not yet met standards required to register.

Ms Ali told the BBC’s Today and Victoria Derbyshire programmes the school had remained open as its work with the children was “quite unique”.

“I’ve been teaching for 15 years and I’ve seen how children need a different approach and that what we’re trying to do at Ambassadors,” she said.

“This is why I believe in what we’re trying to do because we’ve seen a lot of results within our children. They’re happy learners.”

Inspectors twice issued warnings they believed the school was operating illegally, after it first applied to register in 2016.

And it failed its pre-registration inspection, in February 2019, with inspectors judging it would not meet the Independent School Standards.

However, the school remained open – leading to Ms Ali’s prosecution.

The inspection found she had, “wilfully neglected to meet some basic, crucial, safeguarding responsibilities”.

Inspectors found six out of 11 teachers had not had Disclosure and Barring Service (DBS) or criminal-record checks.

But Ms Ali said all staff working at the time of the inspection had been thoroughly checked.

“At that time, we only had four members of staff at that school,” she said.

“So, the staff who had left were still on the central record… we did try to explain it to the inspector.”

Inspectors also said ”teachers do not have the skills” to help pupils progress and concluded there was ”no capacity for improvement” at the school.

And they found there was ”no plan in place to actively promote fundamental British values”.

In 2018, inspectors found texts in the staffroom that:

But they found no evidence children had access to these books.

Ms Ali said the books had been donated by a mosque and had been kept locked in the office. Accepting they were unsuitable, she denied they contributed to a perception she did not want the school to be part of modern British society.

She said: “I don’t believe that just by finding some books or a paragraph from a book like that makes us go against the fundamental British values… because our children and us, we’ve grown in British society.”

It is unclear how many hours the school currently operates, although Ms Ali insisted it was not longer than 18 hours. But we saw a timetable for pupils aged 11-14 that added up to 21 hours per week. Ms Ali denied it was accurate.

The pupils used to be taught the Koran in school – but this now happens at a nearby mosque. Ms Ali said the Koran lessons were run by parents – but the school website, no longer online, asked parents to pay £80 a month for the lessons.

Parents also say they run a home-tuition club in a separate setting close to the school.

Ms Ali said she was getting her paperwork in order to apply again to register the school in a few weeks’ time.

Despite Ofsted inspecting almost 260 suspected unregistered schools since January 2016, and issuing warning notices to 71 settings, this was only the second time a case was brought for prosecution.

An Ofsted spokeswoman said there needed to be a proper legal definition of “schools” and “full-time”, as the current legislation was too vague.

“If it’s providing all, or substantially all, of a child’s education, then it’s a school and it should be registered, so we can make sure children are safe and getting a good education,” she said.

“The law didn’t expect unregistered schools to exist – it wasn’t designed to prevent these places from happening.”

Education Minister Lord Agnew said unregistered schools were “illegal, unsafe and anyone found to be running one will be prosecuted”.

“Where settings are only operating part-time, there are a range of legal powers in place to make sure children are safe in their care

“And in the vast majority of cases those settings are doing an excellent job in enriching young peoples’ lives.”

“We have provided funding to a number of councils to boost their capacity to take action on settings causing concern.”