Covid-19: Who is WHO Chief Tedros? By Yang Jianli & Aaron Rhodes

– World Health Organization (WHO) Chief Tedros Has Got to Go 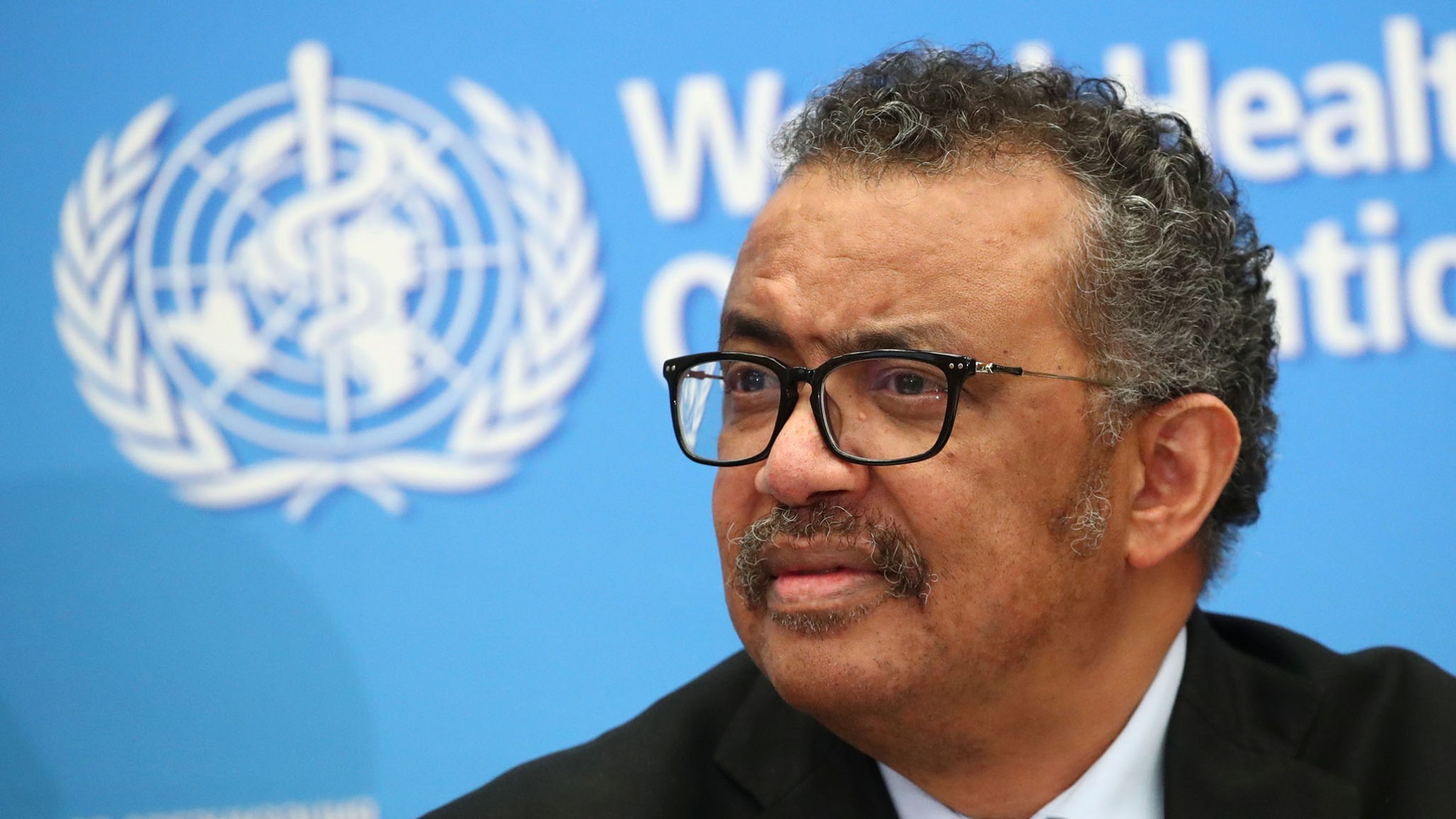 – National Review (17.04.2020) – https://bit.ly/2XHtSXw – The international public-health group’s head has aided China’s coverup of the COVID-19 pandemic at every turn, endangering countless lives in the process.

The ultimate, primary responsibility for the COVID-19 pandemic lies with CCP authorities, who concealed the outbreak from the beginning and suppressed the spread of accurate information about it. But Tedros also bears significant responsibility for aiding and abetting the CCP’s coverup. He is a living testament to the success of Beijing’s aggressive efforts to coopt international institutions to its will, efforts that must be stopped sooner rather than later.

If the deadly and destructive made-in-China COVID-19 crisis has a silver lining, it is this: The strengths and weaknesses of particular leaders, governments, and institutions around the world have been exposed by the pandemic, thus providing an impetus for reform.The World Health Organization (WHO) has come under particular scrutiny at a time of rising skepticism about the ability of international institutions to act responsibly and transparently independent of corrupt political influence. The U.S., which is by far the single largest funder of the WHO, has enormous leverage in this case, and is now beginning to use it: The Trump administration, angered by the WHO’s role in the pandemic crisis, recently announced that it would suspend and review the $400 million annual American contribution to the group.

Dr. Tedros Adhanom Ghebreyesus, the WHO’s director-general, bears primary responsibility for its missteps in responding to the crisis, particularly its crucial early delay in classifying COVID-19 as a Public Health Emergency of International Concern. It is thus appropriate to inquire about his background and the motivations that have driven his actions in this pandemic.

Tedros, a trained microbiologist who did earn an MSc in the immunology of infectious diseases at the University of London, was Ethiopia’s minister of health from 2005 to 2012, and subsequently its minister of foreign affairs from 2012 to 2016. He was also served on the nine-member executive committee of the Tigray People’s Liberation Front (TPLF), one of four ethnically based political parties making up the Ethiopian People’s Revolutionary Democratic Front (EPRDF), the brutal authoritarian regime that ruled Ethiopia with an iron fist from 1991 to 2019.

When Tedros sought to become WHO director-general in 2017, he met with fierce opposition to his candidacy from Ethiopians angry with his service to and defense of the country’s abusive regime, as well as his record as minister of health. He was ultimately confirmed despite allegations that, as minister of health, he directed the cover-up of three deadly cholera epidemics by simply insisting that they were Acute Watery Diarrhea (AWD), apparently hoping to avoid the impact that the public admission of a cholera epidemic might have had on Ethiopian tourism and the image of his party.

For as long as he could, Tedros was happy to validate Beijing’s clumsy efforts to minimize and downplay the viral outbreak in Wuhan. While China was actively covering up the virus and censoring information about it, Tedros lavished praise on Xi Jinping’s response as “transparent,” “responsible,” and “setting a new standard of the world.” Even as international pressure grew, he delayed declaring the outbreak a Public Health Emergency of International Concern. When the declaration was finally made on January 30, 2020, he was careful to say that, it was “not a vote of no confidence in China. On the contrary, WHO continues to have the confidence in China’s capacity to control the outbreak.”

Days later, at a time when China had reported 361 deaths from the virus — and when, we know now, the actual number of Chinese deaths was actually much higher — Tedros, echoing the Chinese government’s stance, remained adamantly opposed to restrictions that would “unnecessarily interfere with international trade and travel” in an effort to stop the pandemic’s spread. Until at least as late as February 29, shortly before the extent of the pandemic’s global reach and threat began to become clear, WHO was still officially opposed to such restrictions. The Chinese Communist Party (CCP), in turn, was all too happy to criticize the United States and other countries that had imposed early travel restrictions on China as having “violated the WHO’s advice.”

Meanwhile, plenty of countries believed the CCP and Tedros’s WHO, and chose not to implement necessary border controls against the epidemic. As a result, the virus began to spread from country to country across the globe, until even those nations that had tried to restrict travel from affected areas early on were powerless to stop it from invading their shores.

What makes all of this even less forgivable is that the Tedros-led WHO was informed of the truth about the virus at a time when life-saving action could have been taken, and chose to ignore it. On December 31, 2019, scientists in Taiwan, which continues to be excluded from the WHO due to Chinese pressure, notified WHO officials of evidence of “human-to-human” transmission, but the officials did not pass on this information to other countries. (Ironically, Taiwan, forced to deal with the threat without any help from the WHO, fared better than many other countries in the end, because its natural distrust of the CCP meant it was not fooled by Beijing’s efforts to downplay the outbreak’s seriousness.)

For as long as he could, Tedros ignored Taiwan’s warnings and validated China’s grossly negligent lies. But when the world finally began to awaken to the threat of COVID-19, Tedros almost immediately began blaming the international community for its earlier inaction. On March 11, 2020, as the WHO declared that the coronavirus had become a global pandemic, Tedros had the gall to say that “some countries are struggling with a lack of resolve,” that the WHO was “deeply concerned . . . by the alarming levels of inaction,” and that “some countries are not approaching this threat with the level of political commitment needed to control it.”

There is a lesson to be learned from WHO’s response to this global crisis, and it concerns the corruption of international institutions by authoritarian regimes. Tedros favors dictators because he is favored by them, and vice-versa. His candidacy for director-general of the WHO was endorsed by health ministers from Algeria and numerous other nondemocratic countries. The World Health Assembly approved him for the post with an overwhelming 133 votes out of 185, despite strong opposition from many Ethiopians who knew his derisory domestic record. China was a major backer of Tedros’s candidacy, as was his own TPLF party, which spent millions of dollars on his campaign.

Not surprisingly, Tedros’s record at the WHO has been one of whitewashing and coddling dictatorships. On October 18, 2017, only three months into his tenure as director-general, Tedros appointed Zimbabwe’s Robert Mugabe, one of the longest-ruling and most brutal dictators on the planet, to serve as a WHO goodwill ambassador focused on tackling non-communicable diseases in Africa. “I am honored to be joined by President Mugabe of Zimbabwe, a country that places universal health coverage and health promotion at the center of its policies to provide healthcare to all,” he said at a conference in Uruguay announcing the decision. (After the appointment was widely condemned by influential leaders in the health sector, politicians, and human-rights defenders, he eventually rescinded it.)

Of course, one need not even mention Tedros’s general affinity for dictators to explain his direction of the WHO’s response to the coronavirus pandemic. The CCP and Tedros clearly enjoy a reciprocal relationship, one based on material interests as well as common values. The CCP donated generously to Ethiopia while Tedros was the Ethiopian foreign minister, and provided forceful backing of his campaign to lead the WHO. In response to the widespread criticism of the organization’s mishandling of the coronavirus outbreak, Chinese state-run media outlets have vigorously defended Tedros, claiming he is being “attacked by the West” for “helping us.”

The ultimate, primary responsibility for the COVID-19 pandemic lies with CCP authorities, who concealed the outbreak from the beginning and suppressed the spread of accurate information about it. But Tedros also bears significant responsibility for aiding and abetting the CCP’s coverup. He is a living testament to the success of Beijing’s aggressive efforts to coopt international institutions to its will, efforts that must be stopped sooner rather than later. And his actions have endangered hundreds of thousands if not millions of lives across the globe. The free citizens and governments of the world should not rest until he is removed from his post atop the WHO.

— Jianli Yang is the founder and president of Citizen Power Initiatives for China. Aaron Rhodes is the president of the Forum for Religious Freedom-Europe, the human-rights editor of Dissident magazine, and the author of The Debasement of Human Rights.