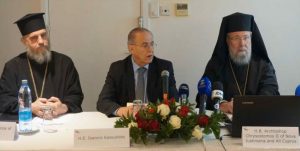 HRWF (13.11.2017) – On 9-10 November, the Conference of European Churches (KEK-CEC) held a conference on the protection of places of worship and holy sites in Nicosia (Cyprus) under the auspices of His Beatitude, Archbishop Chrysostomos II of Nova Justitiana and Cyprus. At the end of the event, the participants adopted a number of recommendations.

KEK-CEC (13.11.2017) – In the run up to the European Year of Cultural Heritage 2018, European churches are urging the European institutions to increase their efforts to ensure respect and protection of places of worship and holy sites, both in the EU law and in the Common Foreign and Security Policy.

These church leaders were participants of a conference organised by the Conference or European Churches and the Church of Cyprus, in Nicosia, Cyprus, from 9-10 November.

The forty participants of the conference emphasised that several gaps in the international legal regime, governing such sites, need to be filled, in particular a common definition and legal remedies. To buy, build, own, maintain, restore and use such religious places are part and parcel of the fundamental right to Freedom of Religion or Belief, they said.

The conference explored different legal, political and cultural contexts of the theme. This included Western Europe, with its increasingly secular setting, as well as regions where religious sites have been politicized in conflict situations, such as in Kosovo (UNSCR 1244/1999), in the divided Cyprus, in Ukraine, in Syria and in the City of Jerusalem, which holds special significance to Jews, Christians and Muslims alike.

For Cyprus, His Beatitude Archbishop Chrysostomos II of Nova Justiniana and All Cyprus spoke about the need of de facto protection of the churches in Cyprus. Religious monuments in the country are not under the effective control of the Republic of Cyprus and are often vandalized with the Turkish Cypriot side doing little to prevent that. Legal owners are also often denied access to and prevented from worshiping at their holy sites. “Using the right of access to places of worship for political ends is not conducive to dialogue,” said Cyprus’ Foreign Minister Ioannis Kasoulides.

Speaking about the Holy Land, His Beatitude Theophilos III, Patriarch of Jerusalem and all Palestine, said that over the last several months, a new level of threat has emerged to the stability of Jerusalem as a multi-ethnic, multi-cultural and multi-religious society of which the diverse holy sites are concrete evidence, and that the churches have become increasingly concerned about their properties.

For Syria, Bishop Armash Nalbandian, Primate of the Armenian Diocese of Damascus, talked about the great suffering his community that has lived through during the civil war. He emphasized the desire to return the country to relative harmony between different faiths that existed before the conflict.

Fr Sava Janjic, Abbot of Dečani Monastery in Kosovo (UNSCR 1244/1999), demanded that “political leaders in the Balkans should demonstrate more commitment to the protection of cultural and religious heritage of vulnerable communities and make more efforts to prevent further destruction of holy sites”.

The moderator of CEC Thematic Reference Group on Human Rights, Rev. Dr Göran Gunner, stated that “the destruction of a place of worship often deeply affects the identity of a religious person, who wants the site to be preserved for the present and future generations with dignity, integrity and respect.”

2.)   urge for a strong and effective protection of such sites in national as well as in international law from illegitimate interferences, such as the denial of access, the obstruction of religious ceremonies, damage, plundering and trafficking of artefacts, and destruction, both from a state and/or from third parties, giving special attention also to the prohibition of unlawful, disproportionate, discriminatory or otherwise unjust dispossession.

3.)    call on all Members of the Conference of European Churches as well as on all other Churches and communities of religion or belief in Europe and the Middle East

4.) expect the European Institutions and the Member States of the European Union, in cooperation with other international actors[iv],

The Conference of European Churches (CEC) is a fellowship of some 114 Orthodox, Protestant, Anglican and Old Catholic Churches from all countries of Europe, plus 40 National Councils of Churches and Organisations in Partnership. CEC was founded in 1959. It has offices in Brussels and Strasbourg.