Colombia sees surge in femicides amid uptick in violence 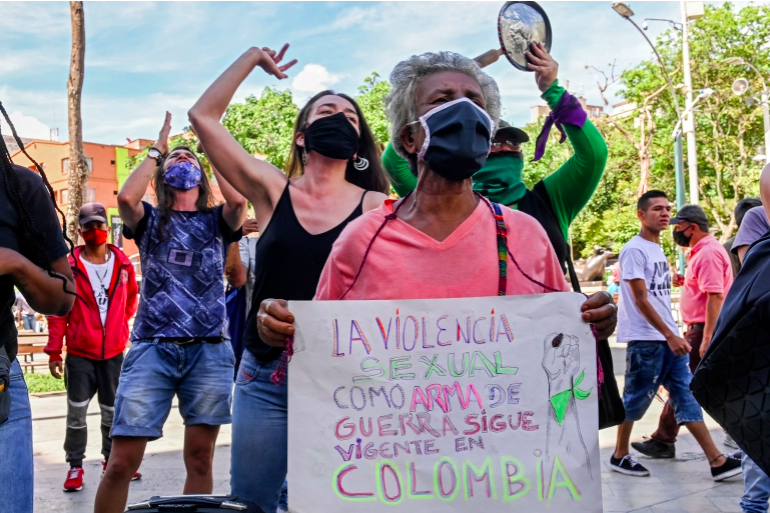 Femicide Observatory records 86 killings of women and girls in September, the highest monthly total since 2017.

Al Jazeera (20.10.2020) – https://bit.ly/34t1USc – Letica Estacio hoped the wave of gender-based violence that surged during the coronavirus lockdown in Colombia would slow after the South American country eased restrictions in early September.

But after the five-month lockdown was lifted, femicides – the killing of women due to their gender – surged across the country, data from Colombia’s Femicide Observatory shows.

An average of nearly three women a day were killed in Colombia in September, with 86 femicides recorded in the month. It is the highest monthly total researchers have documented since they began tracking the killings in 2017.

Watchdogs said the spike in violence against women is a product of compounding long-term ripple effects of the pandemic – a resurgence of armed group violence and economic fallout – that disproportionately affect women.

“Every day the conflict gets worse and worse. The narcotrafficking, the killings,” said Estacio, a 52-year-old women rights leader in the western coastal city of Tumaco. “It’s incredibly heavy, and even more so for women.”

At the beginning of the pandemic, countries across the world saw rises in domestic violence as lockdowns restrictions closed women in with their abusers. Latin America, a region which recorded high rates of gender-based violence before the pandemic, felt that even more acutely.

Estacio and other leaders in Tumaco, a hub for narcotrafficking and armed conflict, were overwhelmed by an initial surge in domestic violence cases after the country entered a nationwide lockdown in March.

But as the state diverted resources from some parts of the country in order to focus on bringing the coronavirus outbreak under control, a patchwork of criminal groups – left-wing fighters, right-wing paramilitaries and narcotrafficking gangs – moved into areas vacated by the government and waged territorial war.

“Here, there’s no such thing as law,” Estacio said.

As a result, mass killings and similar bloodshed reminiscent of times before the country’s 2016 peace process have jumped country-wide.

Sexual and gender-based violence have long been used as tools of war to sow terror in communities. Now, Estefania Rivera Guzman, a researcher at the Observatory, is concerned that the strategic targeting of women could be on the uptick.

So far in 2020, the group has registered 445 cases of femicide, up from 431 cases across the same period in 2019. The numbers recorded in September were more than double levels witnessed earlier this year.

Since September, women’s rights leaders have also noted another disturbing development: As armed groups clash in rural areas and exploit vulnerabilities caused by the pandemic to increase child recruitment, there has been a spike in the number of women and girls killed by firearms.

In recent weeks, one man pleaded guilty to beating and stabbing a woman who rejected his sexual advances, throwing her into the western Cauca River where her body was found floating.

Near Tumaco, armed men reportedly stopped and shot up the car of a local women’s and Indigenous rights leader.

And in the central town of Segovia, one 14-year-old girl was reportedly killed by a hitman and, a day after being buried, her body was found unearthed and naked in the cemetery.

“It’s these acts of violence that are so extreme that they send a message,” Rivera Guzman said. “And the message isn’t just for women, but also for the men who live in the zone, and it’s: Who has the power?”

While officials in Segovia said they “reject all violent acts” against women and girls and police say they are investigating the crime, the majority of femicides in the country end in impunity.

In Tumaco, Estacio and other observers say women are often too scared to report gender-based violence because men working with armed groups camp outside government offices where women would normally report.

Meanwhile, the economic fallout caused by the pandemic and the lockdowns has disproportionately affected women, putting them at heightened risk.

Before the COVID-19 outbreak, Colombia had one of the highest economic gender gaps in Latin America. In recent months, female-dominated industries like tourism and the service sector have taken severe hits.

Estacio said women in her community who would normally support themselves by working informally and selling street food were left with no income, as work dried up amid the lockdown.

It has stripped at-risk women of “economic autonomy”, explained Carolina Mosquera, researcher at the Bogota-based think-tank, Sisma Mujer. And with it, their ability to escape from an abusive situation that could escalate to something as extreme as femicide.

In one recent case, a woman called the organisation’s domestic abuse helpline, and they worked to get her out of her home where she was being abused by her husband. Hours later, when they called back, she told aid workers she could not leave because she was surviving off her husband’s salary.

When they tried to follow up “she simply stopped answering.”

“It’s a loss of 10 years of work toward gender equality because women are returning to these patriarchal spaces,” Mosquera said. “It brings us back to this old dynamic of the man as the provider and the woman who cares for the home.”

The pandemic left more than 15,000 women in Colombia at extreme risk of femicide, according to the National Institute for Legal Medicine and Forensic Science. Similar upticks have been seen in other Latin American countries like Guatemala and Mexico.

Colombia’s Ombudsman’s Office, which oversees the protection of human rights, declined to comment, saying that due to lack of state presence caused by the pandemic, they haven’t been able to officially register the femicides.

“A line doesn’t guarantee access to justice, to a restitution of their rights. No, a call is just a call.” Mosquera said. “This effort by the government falls short compared to the volume of cases, killings and violence we’ve seen in the pandemic.”

Photo: Women protest against violence against women with a sign reading ‘Sexual violence as a war weapon still exists in Colombia’ in Medellin, Colombia, on June 19, 2020, amid the new coronavirus pandemic [Photo by Joaquin Sarmiento/AFP]