CHINA: USCIRF “adopts” 35 Chinese prisoners—25 are members of The Church of Almighty God

The U.S. Commission on International Religious Freedom delivers a powerful blow to China. This proves just how useful USCIRF is, despite criticism by some US lawmakers. 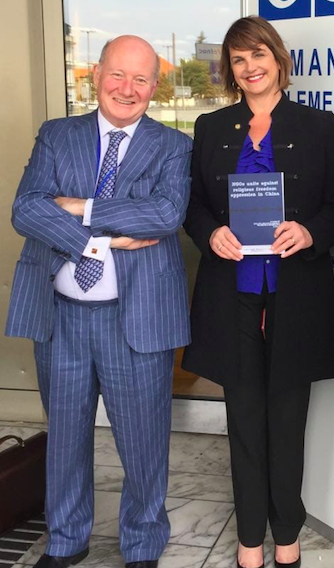 Former USCIRF Commissioner and Vice-Chairperson Kristina Arriaga with Bitter Winter’s editor-in-chief Massimo Introvigne. Arriaga holds in her hands a collection of documents denouncing CCP atrocities against The Church of Almighty God.
The booklet held by Kristina Arriaga “NGOs Unite Against Religious Freedom Oppression in China” is a publication of Human Rights Without Frontiers. It can be consulted online at https://hrwf.eu/forb/our-reports/ as well as “Tortured to Death.”

Bitter Winter (29.11.2019) – https://bit.ly/2YzfuyK – Ms. Du Xiaoqin was born on August 28, 1972, in Xialou Town, Lingbi County, Anhui Province, China. She joined The Church of Almighty God (CAG) in 1998. According to a judgment published in the very official data base China Judgments Online, and reported by pro-government Chinese media, on July 16, 2018, twenty-four CAG members were sentenced to jail terms of 3 to 5.5 years by the Yuhui District People’s Court of Bengbu City, Anhui Province.

The police had arrested altogether 36 CAG members, including Du Xiaoqin, while they were gathering in Bengbu and shooting CAG gospel videos. After 45 days of secret surveillance, the police had discovered their six gathering places. On August 29, 2016, the Bengbu police conducted a unified arrest of 36 CAG members and confiscated their video-shooting equipment.

Twenty-four of the CAG members arrested, including Du Xiaoqin, were indicted by the Yuhui District People’s Procuratorate of Bengbu City on suspicion of organizing and using a xie jiao, i.e. a religious group prohibited under Chinese law. Information on the remaining 12 arrested CAG members is unavailable. On July 26, 2018, Du was sentenced to 3 years and 6 months and fined 8,000 RMB (about 1,200 USD) by the Yuhui District People’s Court in Bengbu under Art. 300 of the Chinese law, the provision against the xie jiao. Du and 17 other CAG members still remain in prison.

The CCP obviously believed that Du and the others would simply be forgotten, subject to the harsh life of a remote Chinese jail where mistreatment and torture are common. The CCP, however, was wrong. Not only scholars have studied these cases of application of Art. 300 as gross violations of religious liberty, and evidence that indeed Chinese law punishes the most elementary forms of religious activity by the groups labeled as xie jiao. Now, the U.S. Commission on International Religious Liberty (USCIRF) has published a list of 35 prisoners of conscience in China, including Falun Gong practitioners and others. 25 out of 35 are members of the CAG, confirming that the CAG is currently the most persecuted religious movement in China.

What is USCIRF? It is an independent and bipartisan commission of the U.S. Federal Government, created in 1998 to monitor the situation of religious liberty outside of the United States. Its yearly international report is regarded as one of the most authoritative assessments of the status of religious freedom internationally. Part of its mandate is to “adopt” selected prisoners of conscience, whose cases it has investigated. Some of those selected by USCIRF are then personally “adopted” by members of the US Senate and House, who start personally advocating for their cases.

Human rights activists and scholars throughout the world have learned to highly respect USCIRF and its documents. It is an official commission of the U.S. Government, yet it is politically independent. Unfortunately, not everybody likes this independence. USCIRF advocates for religious freedom irrespective whether the perpetrators of human rights violations are good economic partners of the U.S. or otherwise. The CCP and other enemies of religious liberty hate USCIRF with a vengeance. And USCIRF bases its work on the idea that religion is a force for good in the world and should not be persecuted.

Interests hostile to religious liberty have now came together in the US, and certain MPs have proposed a law that would dramatically change the scope of USCIRF, submitting the independent Commissioners to government bureaucrats, introducing a political control of their documents, and extending its mandate to crimes allegedly committed not “against” but “by” religions, in discriminating against others (including atheist, women, and homosexuals). Obviously, these problems also exist, but there are plenty of federal agencies in the US dealing with them. The aim of the law is simply to de-potentiate USCIRF, whose good work has disturbed both countries that are important business partners of the U.S. and American companies that work with them. Naming names would be pleonastic. Our readers easily understand which kind of countries do not like USCIRF.

In protest against the new draft law, Ms. Kristina Arriaga de Bucholz, who has been for years a leading and brilliant Commissioner (and Vice-Chairperson) there, has resigned from USCIRF and explained why in a Wall Street Journal article. Followed widespread protest, the controversial draft bill “reforming” USCIRF was withdrawn. But maneuvers against the USCIRF are not over. The precious work USCIRF does about Chinese prisoners of conscience just proves once again that the independence and the role of the Commission should be maintained and preserved—in the interest not of the U.S. only but of all friends of religious liberty and human rights.

As of mid-November, HRWF’s Database of FORB Prisoners in China (https://hrwf.eu/hrwf-prisoners-database-china/) contained: