In Shanghai the “basic values ​​of socialism” are exalted on the pediment of the church. A painting of the Last Supper removed in Henan. Communities forced to sing patriotic hymns. Shaolin Monastery in Shaoshan must hold a flag-raising ceremony every morning. “The churches seem more and more like government offices”. 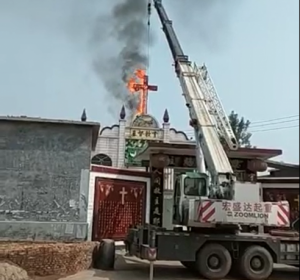 AsiaNews.it (28.08.2018) – https://bit.ly/2C3qqwW – In the name of the sinicization, to create a Christianity with “Chinese characteristics”, the government authorities are burning crosses on the bell towers, replacing them with the red flags of China; slogans praising the Party and the values ​​of socialism are exposed on religious buildings, erasing sacred images, that are considered too Western.

In recent days in Henan, the cross of a Protestant church was burned in Anyang, Shuiyi County (see video); another was demolished in Hebei; another one in Luoyang has been replaced with the red flag (see photo 2). Even a Catholic center in Anyang had to display the flag (see photo 3).

In a church in the province, the authorities demanded the removal of the cross, paintings with calligraphy of verses from the Bible and a painting of the Last Supper.

Similar events also take place in Jiangxi. Testimonies gathered by Chinaaid in Xinyu County say that churches are forced to wave the national flag, to display a picture of President Xi Jinping and slogans praising socialism. Many crosses have been destroyed, including that of the evangelical church of Jieken.

At least 40 churches in Shangrao have been forced to display banners that prohibit the preaching of non-Chinese people and prohibit entry to young people under the age of 18.

In Zhejiang, in Leqin, the authorities have forced the churches to exalt the Chinese Communist Party, by singing patriotic anthems at a flag-raising ceremony and pushing for concerts with nationalist programs.

In the Pudong region of Shanghai, the Xuanqiao’s Church of Jesus Christ had to display the slogan on the “basic values ​​of socialism”.

Dozens of domestic churches have been closed in Shenyang (Liaoning) and Xuzhou (Jiangsu) forcing communities to join the Three-Self Movement, the official government controlled Protestant community.

Sinicization, the slogan launched by Xi Jinping, aims to force all religions to assimilate Chinese culture and above all to submit to the authority of the Communist Party. According to many Chinese faithful, “under the mantle of patriotism, religions are being emptied of the elements of their faith and are seen as political instruments at the service of the government and the Party”. A Catholic comments to AsiaNews: “At this stage, with the red flags, the patriotic songs, the ban on young people taking part, the churches seem more and more like  government offices”.

No religion escapes this homogenization. Since yesterday, the Shaolin Buddhist monastery in Shaoshan (Henan) has also carried out the flag-raising ceremony every morning (see photo 4). The whole Chinese Buddhist Association has decided to join in the initiative.