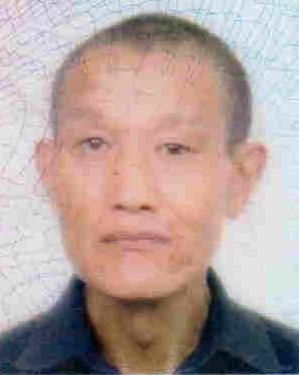 Tian Ji’an, male, born 27 September 1953, resident of Huafeng Township, Shizhu County, Chongqing Municipality, joined The Church of Almighty God (CAG) on 8 June 2002. On 5 June 2006, he was arrested and brutally beaten by the Chinese Communist police. As a result, Tian suffered from a lacerated lumbar vertebra and a fractured cranium

with a bone fragment recessed into his brain. Hardened blood coagulation led to neurological disorders and impaired reasoning. Tian was left unable to work. After more than nine years of affliction, Tian died on 2 April 2016, at the age of 63.

At 16h00 on 5 June 2006, Tian’s wife, Jin Zhenghua, and two other Christians were preaching the gospel to four potential converts in their own house when the front door was suddenly rammed open. Led by Captain Sun Jianming, Director Liu Zhikui, and Secretary Zhou Shicai of the National Security Brigade, Shizhu County, Chongqing Municipality, more than a dozen policemen entered the house, placed the Christians under control, and beat Jin Zhenghua viciously. The police pressed Tian on the floor, handcuffed him behind his back and violently punched and kicked him. A policeman stepped and treaded hard on Tian’s back and shoulders. Another policeman stomped hard on Tian’s lower back and waist while a third policeman stepped on his head. Other plainclothes policemen in leather shoes kicked Tian’s body hard. They yelled as they were beating him, “Kill him! Dammit, kill him….”, Tian shrieked in pain throughout the ordeal, powerless to resist. More than a dozen policemen kept on battering him for more than an hour. Tian Ji’an was beaten unconscious on the spot. He was close to death. His face was ashen and his lips blue.

After the beating, Zhou Shicai and two other policemen ransacked the house and seized four spiritual books, a pack of spiritual compact discs, and other items. The police took Tian, Jin Zhenghua, and the others into police cars and escorted them to the Shizhu County National Security Brigade for interrogation. That night, seeing that Tian was seriously wounded and fearing that he might die at the National Security Brigade, the police sent him home. On the third day after returning home, Tian felt his condition was worsening: he lost a lot of weight, felt it hard to swallow anything, or sleep; he coughed and urinated with thin blood; and even became incontinent. He was too weak to do anything.

A life in pain

On 5 July, Tian’s wife, Jin Zhenghua, was sentenced to one-year imprisonment on the charge of “disturbing public order,” serving her sentence  outside prison. A month later, when she went home to dress Tian’s wounds with medicinal cream, she saw that his body was covered with bruises as a result of the police’s beatings. There was a fist-sized dented mark on his waist and a large cyst on his shoulder. On his head, there were two large hairless spots and more than a dozen of smaller-sized hairless spots. He looked dazed and his speech was incoherent and hesitant. With the help of friends, Tian’s wife scraped together 1,000 RMB and took Tian to the Shizhu County Hospital. Upon examination by the physician, it was discovered that Tian was suffering from many serious internal injuries. Blood stasis in his brain had pressed the nerves and blocked the cerebral blood vessels which led to a blood clot. The beatings had left Tian with a lacerated lumbar vertebra and fractured cranium with a bone fragment the size of a thumb being recessed into the brain. The blockage resulted from hardened blood coagulation and led to neurological disorders and aberrant reasoning. The doctor said, “The part of the skull where the bone fragment is recessed in the brain is inoperable. To operate on it involves life-threatening risks. Without surgery, he can only live for six to seven years at most.”

Since the beating, Tian experienced severe pain in his spine, chest, and brain. He lost his ability to work and exhibited neurological disorders and impaired reasoning. Even when visiting his own farming land, he was unable to recognize where he was or properly care for his crops.

Because of their poor economic situation, Tian’s family couldn’t afford medical treatment and controlled his condition with medicine alone. His condition grew increasingly worse. Tian completely lost ability to take care of himself. 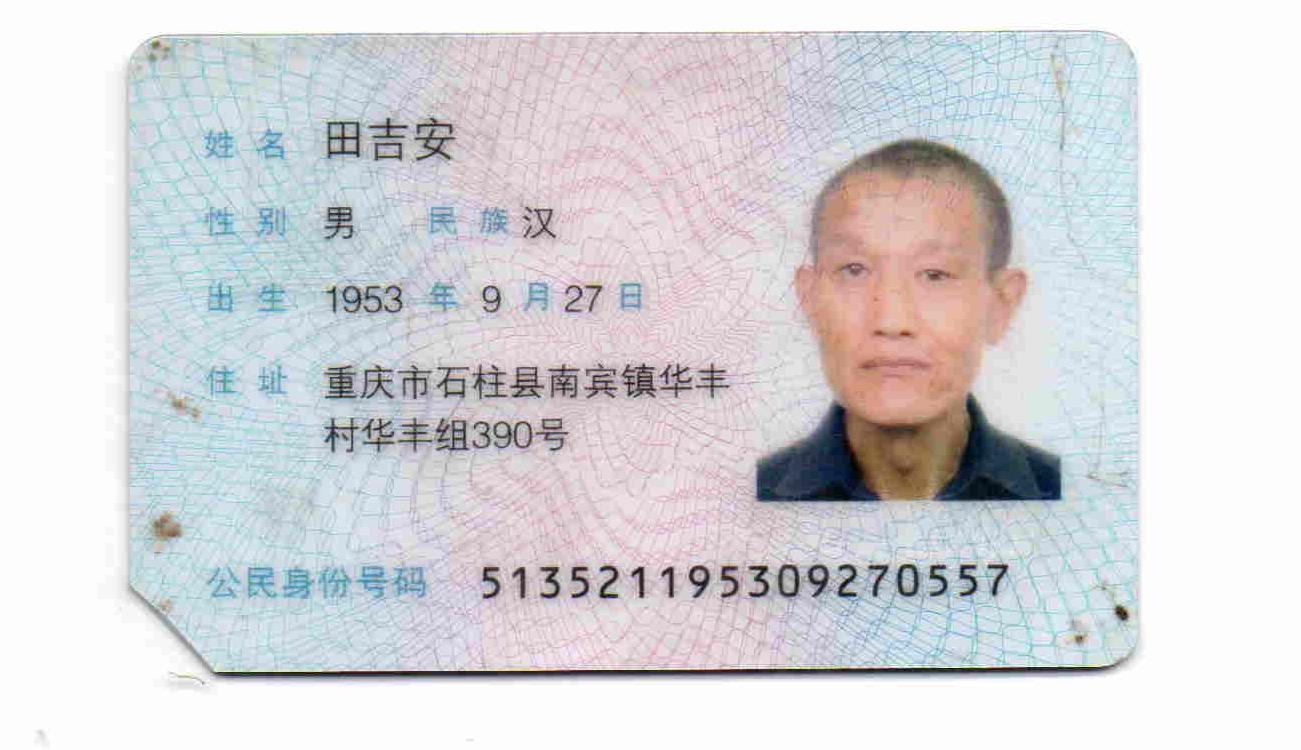 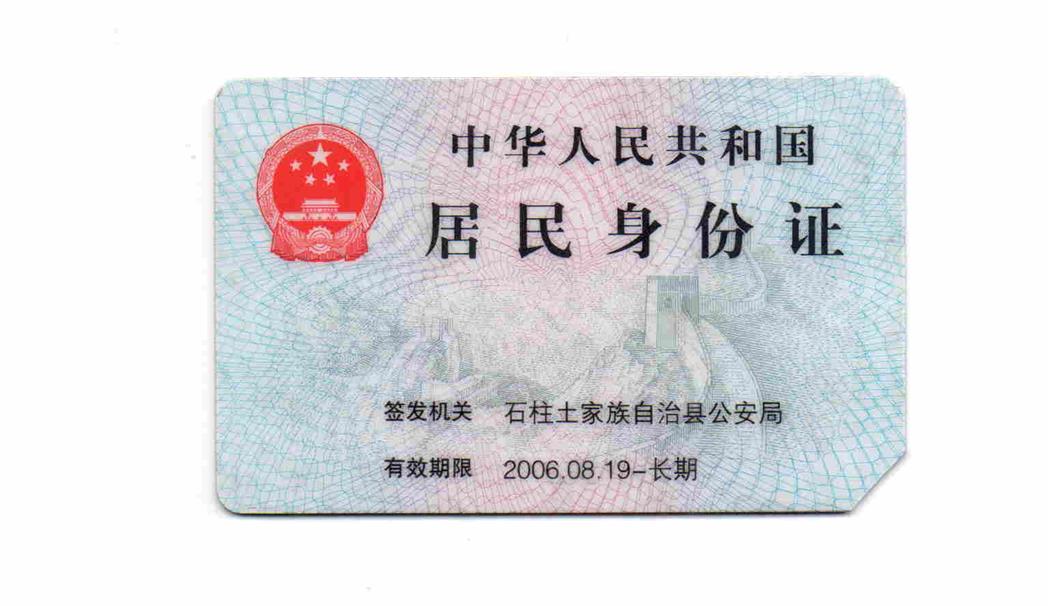 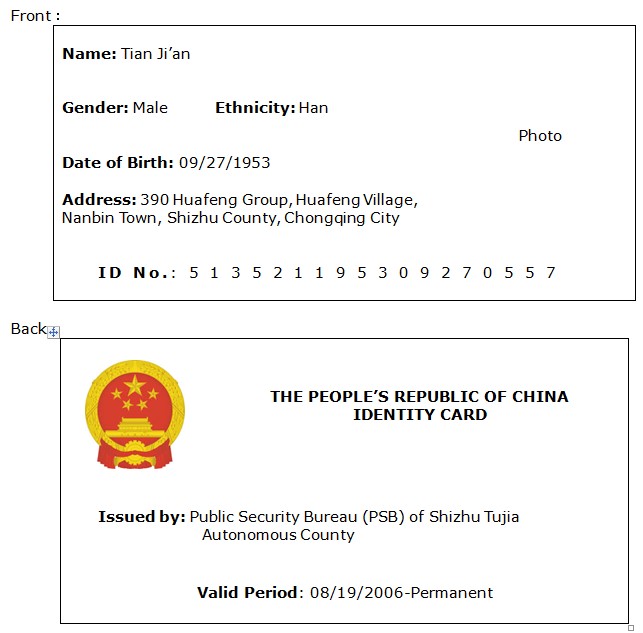 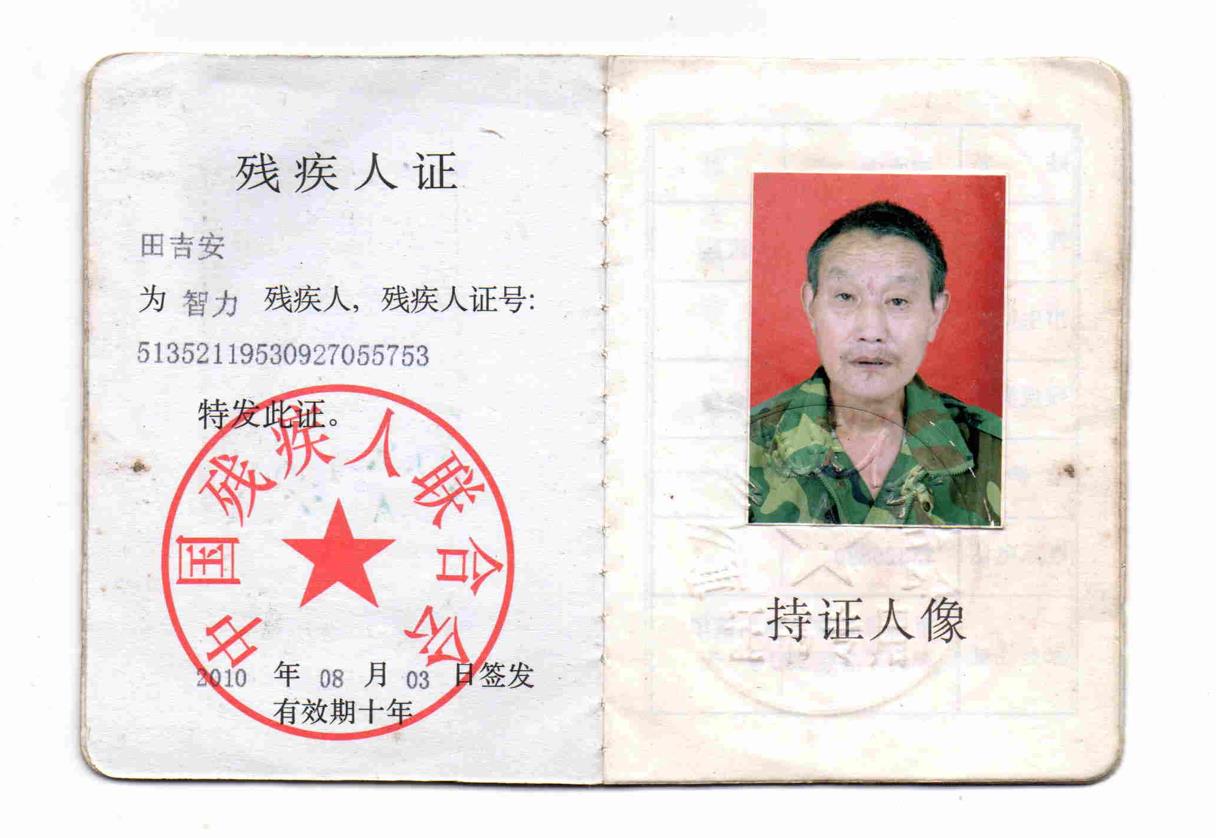 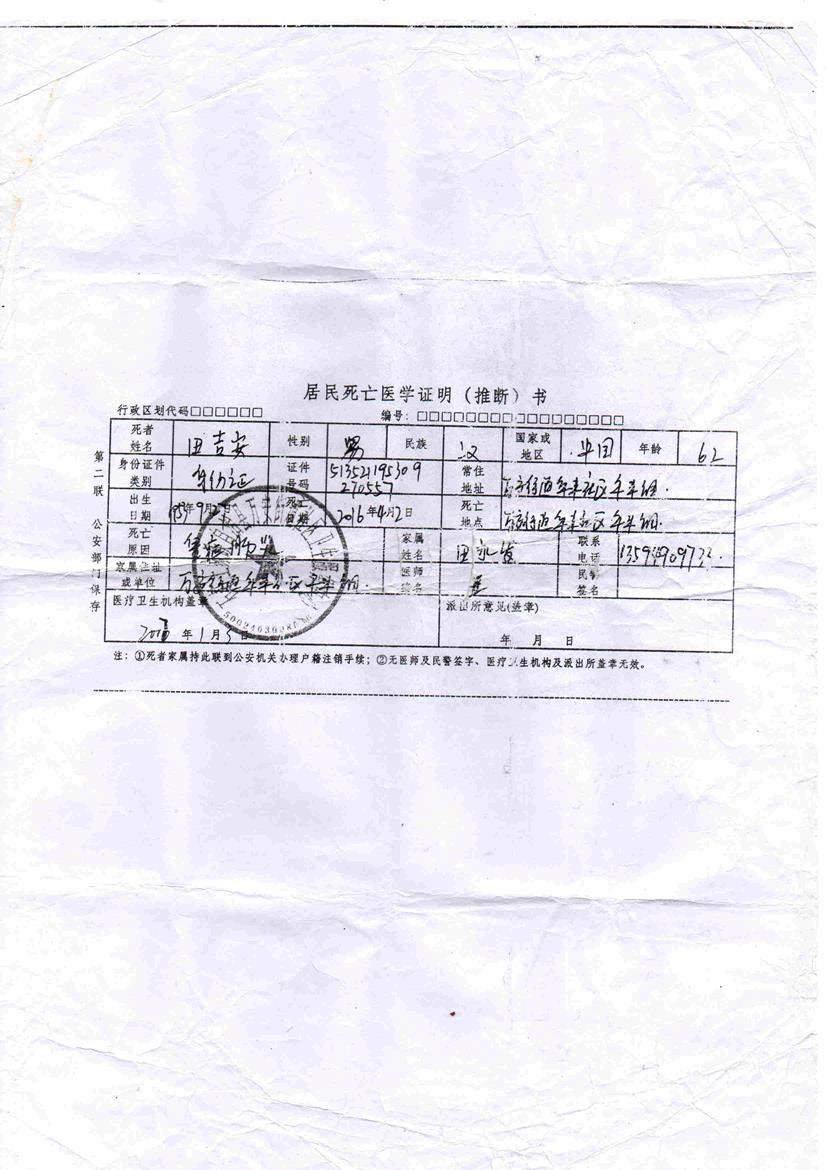 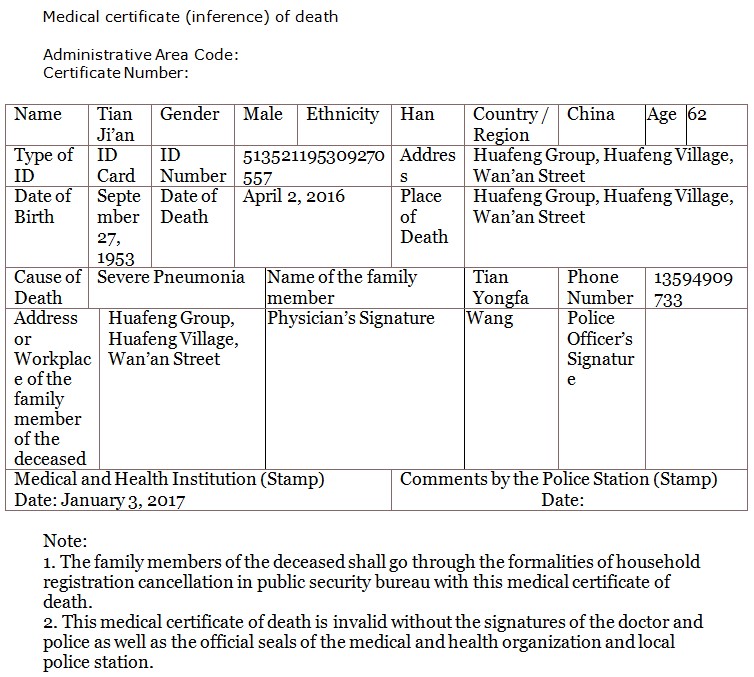