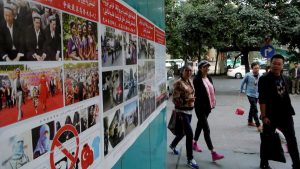 In April 2011, France became the first Western country to ban the wearing of full-face veils in public. Similar national and regional bans in other secular Western countries soon followed, including in Belgium, the Netherlands, Italy, Spain, Switzerland, Austria, and Canada. In Australia, there is ongoing legislative debate on the issue. Under these bans, anybody caught wearing a burka (a veil covering the full face and body) or a niqab (a veil covering the face except the eyes) in public can face fines and in some cases even imprisonment.

China is an officially atheist country. Civil servants and teachers across the country have long been prohibited from participating in religious activities or wearing religious clothing in public. In schools, students can be disqualified from scholarships, government subsidies, attending their graduation ceremonies and even face expulsion if found wearing religious clothing on campus. Around the same time when many in the West were busy passing anti-Islamic legislation, China was rocked by the Urumqi Riots of July 2009. Shortly after, the Xinjiang government began tightening restrictions on Islamic clothing on security grounds in the autonomous region, home to a Muslim population of over 13 million.

In enforcing restrictions on Islamic clothing, Chinese officials have denied that veils are a part of Uyghur culture and have attempted to stigmatize wearers as uneducated and sharing a propensity towards religious extremism. A Phoenix News Media article in 2014 reported that veils had historically never been part of Uyghur culture and only first gained traction in southern Xinjiang in the 1980s. While officials argue that veils are unique to uneducated Uyghurs who share a propensity towards extremism, they also blame religious extremism in Xinjiang as deriving from overseas forces – a line of argument frequently used to justify the forced deportations of overseas Uyghurs. A Uyghur researcher from the Xinjiang Academy of Social Science’s Institute of Sociology opined that the phenomenon of religious extremism was largely driven by the high and disproportionate rates of poverty and unemployment among the Uyghur population. As Xinjiang becomes increasingly dominated by a market-oriented economy run by the Han population, Uyghurs feel they face greater economic, cultural, religious, and political marginalization. The same Uyghur scholar stated that the local Uyghurs’ disillusionment with their future in Xinjiang has led more Uyghur women to adopt the black veil and jilbab in place of their traditional headscarves, especially after the 2009 attacks and the ensuing incidents of ethnic unrest in the region.

Not only has Xinjiang outlawed the wearing of veils in public, but Dui Hua has also uncovered cases of individuals facing criminal charges for wearing veils in their own homes and for selling the banned clothing items. 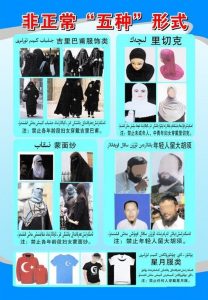 The restrictions on Islamic clothing in Xinjiang first emerged in a number of localities in province’s southern region. However, after the 2009 Urumqi attacks, similar regulations were implemented in northern Xinjiang. Restrictions in the north remained relatively lax until 2013, when the Xinjiang government issued a provisional-wide directive known as Document No.11. In a question and answer format, the document serves as a set of guidelines for local authorities and as a warning to the public on how “illegal religions and extremism” will be handled; there are three mentions of the ban on the jilbab in the text. The document does not specify what the punishment for wearing a jilbab is. It merely calls on officials to “resolutely handle” violators.

It should be noted that the translation of terms used to describe Islamic clothing under Chinese regulations differ from what is generally used in Islamic communities. In August 2014, authorities in Karamay, a city in northern Xinjiang, banned those wearing Islamic clothing and those with beards from boarding a public bus, including women and girls who were wearing what authorities call a jilbab. In Islamic communities, a jilbab refers to a long and loose-fitting garment or cloak designed to cover the entire body while leaving the face visible, whereas under Chinese regulations they use the word jilbab for what would be considered a burka or a niqab in most Islamic communities, which covers the body and the face. The first category of women shown in the “Five Abnormalities,” with veils covering their face and hair but not their eyes, are wearing what would be considered a niqab outside of China, but is called a jilbab in China.

The ban also prohibits young women from wearing what China calls a niqab, a garment that would generally be referred to as a hijab (a headscarf covering the hair and neck while leaving the face visible) in most Islamic communities.

As a provincial-wide directive, Document No.11 has been introduced in localities across Xinjiang. In Karamay, authorities have banned the jilbab, the niqab, all face-covering veils, as well as young men from growing “big beards.” The ban has also outlawed clothes featuring the Islamic star and crescent symbol.

Also in 2013, Xinjiang’s Ili Prefecture issued a provisional rule to proscribe the “five abnormalities” from all public spaces. The 2014 Ili Yearbook reported investigating nearly 1,000 violators and confiscating 7,364 jilbabs and garments with the star and crescent symbol. The following year, the capital of Urumqi followed suit. Instead of using the term jilbab, which opens room for debate about what constitutes a jilbab, the Urumqi regulation has added the more secular-sounding but even vaguer term – “face-masking robes” (蒙面罩袍) – to the Chinese legal lexicon, giving authorities even greater power to determine what garments can be considered illegal. 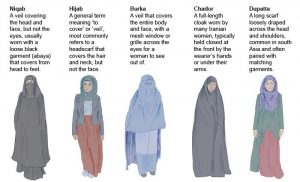 Violators of the aforementioned bans can face criminal prosecution under a number of offenses. One can be prosecuted for “forcing others to wear terrorism, extremism clothes or symbols,” a new offense that carries a maximum sentence of three years’ imprisonment. It was added to the Criminal Law in November 2015 and can be used in cases where violence or coercion is involved. Dui Hua is unable to find online judgments to understand how often this offense is being used by authorities. Unofficial news media has reported on cases of Uyghur women sentenced for promoting the wearing of headscarves, but the exact charges remain unknown.

Dui Hua has found one case where the charge of illegal business activity was used to prosecute an individual for selling banned Islamic clothing. Yang Bao’an (杨宝安), a Han Chinese man who originally migrated to Xinjiang from Hunan, was sentenced to three years’ imprisonment in April 2015 in Ili Prefecture for selling a hundred niqabs in a shopping center in Korgas (China’s westernmost port bordering Kazakhstan). Twenty-four of the niqabs carried the star and crescent symbol. The court found that Yang violated the “five abnormalities” ban that had been widely enforced in Ili Prefecture. Yang pled innocent on several grounds – 1. He was not aware of the meaning behind the star and crescent symbol; 2. Nobody had purchased any of the garments from him; 3. He did not know about the local rules since he had only just arrived in Xinjiang. Given that he had obtained a university education, the court found that Yang should have been aware and cautious about local regulations and that his actions had adversely affected the social stability of the area.

There is also evidence that wearing banned Islamic clothing can fall under the purview of the crime of “picking quarrels and provoking troubles.” In September 2014, the Supreme People’s Court, the Supreme People’s Procuratorate, and the Ministry of Public Security jointly issued a judicial interpretation to expand the applicable scope of this “pocket crime” in cases related to terrorism and extremism. An individual is now punishable for this offense if they disrupt social order by “willfully attacking, chasing, intercepting, and insulting others” while calling others “infidels or religious traitors.”

In March 2015, China Youth Online reported that a court in Kashgar sentenced a group of religious extremists for “picking quarrels and provoking troubles.” The report cited one case in which a Uyghur couple repeatedly refused to comply with “Project Beauty,” a campaign to discourage men from keeping long beards and women from wearing veils and headscarves. The husband was sentenced to six years’ imprisonment for “ignoring the national law.” Not only was he punished for keeping a long beard, but he was also punished for encouraging his wife to wear a veil. As his wife was said to have shown remorse, she was given a relatively lenient two-year imprisonment sentence. The original report was removed the day after it was originally posted. An anonymous source who proclaimed to have written the article allegedly sent an apology statement via WeChat for misreporting the case. Critics remain skeptical of its authenticity, with some suspecting that the apology was made under duress. The article has since been widely circulated online and remains accessible on official news websites.

Banning Islamic Clothing in the Home

Although the ban on Islamic clothing has been enforced in the name of “maintaining public order,” Dui Hua has found cases where authorities in Xinjiang have enforced the ban in people’s homes. Dui Hua uncovered a judgment in which a Muslim man, Gong Xiaojun (龚小军, ethnicity unknown), was sentenced to two years’ imprisonment for “disrupting official business” in Urumqi after arguing with community cadres in December 2014. When the community cadres paid Gong a home visit in June 2014, they found that Gong had grown an “abnormal beard.” The cadres admonished Gong for his beard and Gong allegedly responded with “extreme language” insisting that he grew the beard because he simply liked the way it looked.

The cadres informed Gong and his wife about the ban on “black religious clothing,” and accused his wife of wearing a jilbab. Gong argued that his wife was wearing a long loose black robe, not what the cadres were calling a jilbab and that the cadres had no right to intervene in what his family chose to wear at home. He claimed that he had requested his wife to wear the robe and his wife agreed that she had done so voluntarily. Gong was first indicted for “picking quarrels and provoking troubles,” but was convicted of a different charge – “disrupting official business.” The judgment did not explain in what ways Gong’s language was “extreme,” it only vaguely stated that his language was “extreme” and provocative enough to disrupt law enforcement.

For Muslims who belong to China’s Hui minority, reports suggest that they currently do not face the same intensity of restrictions as Muslims in Xinjiang do. In a propaganda film entitled Leaving Heart in Hezhou (情定河州) about China’s “One Belt, One Road” initiative, the Hui women of Linxia Hui Autonomous Prefecture in Gansu Province are portrayed in long black garments covering their bodies, hair, and necks. While the same clothes are banned in public and private spaces in Xinjiang and violators can face imprisonment, in Linxia, also known as “China’s Little Mecca,” Hui women are currently free to wear veils in public. However, given the growing restrictions on religious freedom in Linxia, the question remains for how long this freedom will last.