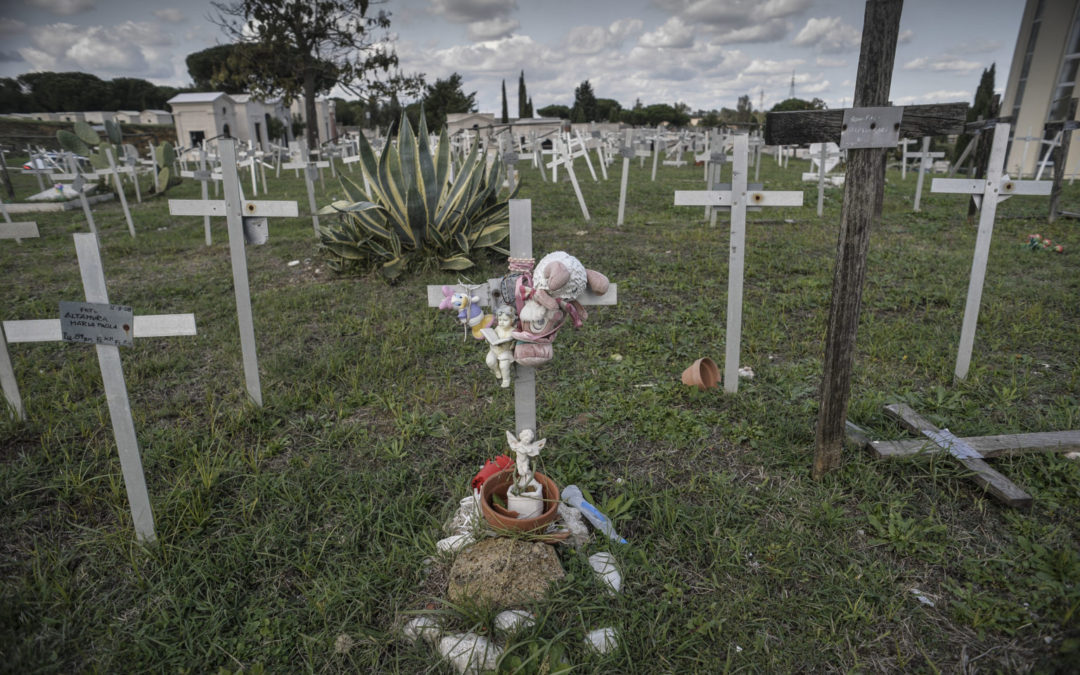 POLITICO (15.10.2020) – https://politi.co/2HitsR9 – At the Prima Porta cemetery, hundreds of white wooden crosses mark the burial plots of aborted fetuses. On each cross is written the name of the woman who terminated the pregnancy.

Until recently, the existence of the cemetery was unknown to many of the women, who say they consented neither to a burial nor to being named. Now that they do know, more than 100 have come together to pursue legal action demanding those responsible be identified.

In Italy, where women still struggle to access abortion four decades after legislation permitting the procedure was passed, the discovery of the burial site has resulted in an outcry. It has also focused attention on dozens of similar sites across Italy — known as “Fields of Angels” and created with the involvement of anti-abortion, ultra-conservative associations.

For opponents, such burial grounds stigmatize abortion and undermine the legitimate choices of women at a time when conservative groups globally are attempting to push back reproductive rights won decades ago.

The Prima Porta site stands out because it names the women.

Its existence came to light earlier this month after Marta Loi made inquiries about what happened to her fetus. Writing on Facebook, she described the “anger and anguish” at discovering a burial plot with her name on it, and that “without my consent, others have buried my child with a cross, a Christian symbol, which does not belong to me.”

Silvana Agatone, president and founder of LAIGA, the Italian association for doctors who carry out abortions, told POLITICO that the burials were “the most serious violation of privacy. Many women do not tell relatives or friends about the procedure.”

“It is a way of punishing the women by creating a sense of guilt,” she said. “To have a tomb with your name on implies that you are as good as dead.”

Monica Cirinnà, a senator in the Italian parliament, told POLITICO: “Every woman who terminates a pregnancy has the right to choose if and how to bury the fetus and according to which ritual. These are deeply personal decisions that cannot be brought into question.”

The issue is a reminder of the global pushback against women’s rights, Cirinnà said. “Even today, women’s bodies are battlefields. Attacks on women’s freedom, regarding the choice to become or not to become mothers, are now coming from everywhere, continuously undermined by small, silent but insidious procedures like this one.”

Although abortion has been legal in Italy since 1978, it has been fiercely opposed from the start by an alliance of religious and political conservatives. There are similar situations in many other countries, but campaigners say the extent to which the Catholic Church remains embedded in Italian institutions means it has been particularly effective in frustrating the implementation of abortion rights.

The majority of doctors qualified to carry out an abortion refuse to do so on ethical grounds — that’s an average of 69 percent across the country, rising to 80 percent in the south, according to the health ministry. That means access is limited and delays common.

Junior doctors often fear their career will be damaged if they don’t join the ranks of objectors, and department heads refuse to hire non-objectors, said Agatone.

The rise among Italian doctors of conscientious objectors does not constitute a problem, according to the health ministry, because the number of abortions is falling while the number of objectors remains stable.

Elisa Ercoli, president of Differenza Donna, an advocacy group representing 130 of the Prima Porta women, said the Fields of Angels “are emblematic of the obstacles to women exercising their right to an abortion in Italy.”

“The level of objectors is so high that the health care guaranteed by law is not accessible,” she said.

Most of the women, Ercoli added, had degrading experiences in hospital, with some medical staff refusing to help them even though they were in pain: “These women feel betrayed by the state. There was a total violation of their legal rights and privacy.”

According to a 1990 law, women can request the aborted fetus and bury it within 24 hours. But if they don’t, the local health service is responsible for arranging transport and burial. Over the past two decades, Catholic associations have increasingly stepped in, relieving the local health authority of the cost and trouble of burying aborted fetuses.

The most prominent group doing this, Difendere la vita con Maria, has 3,000 members and says it has carried out over 200,000 burials. It solicits donations for funding on its website, which says: “For only €20 you can bear the cost of burying an unborn child.”

Spokesman Stefano di Battista said the group does not work in Rome at present. But in the cities that it does work, it collects the fetuses, usually once a month, from the hospitals with which it has agreements, before burying them after a short ceremony. The group never identifies the women, he said, adding: “Anonymity is a guiding principle for us. We do not do this practice to battle against abortion rights. We are not interested in crusades. We believe it is at the basis of civilization to bury with dignity and piety the children that never came into the world.”

Church ties to the right

Catholic associations might be responsible for the Fields of Angels, but they wouldn’t have been able to proceed without political sympathizers at regional and national levels.

In 2007 in Lombardy, a center-right/conservative administration introduced new regulations stipulating that all fetuses had to be buried in specific areas within cemeteries. Le Marche and Campania have approved similar laws.

Last year, an attempt to introduce similar legislation by the hard-right Brothers of Italy party in Lazio was defeated. The liberal Italian Radicals party condemned it as “psychological violence against women.”

“It is in [the political right’s] nature to try to bring back a patriarchal culture, before women’s liberation,” said Ercoli. “But it is not just about political parties, it is a larger cultural discussion. Since 1978 women have been fighting to try to win the actual implementation of the rules.”

It is not clear who bears responsibility for the naming of the women at the Prima Porta cemetery. The section where the fetuses are buried contains only those aborted after the 20th week of gestation, when the procedure is permitted only on health grounds, according to Agatone.

The hospital involved, San Camillo, said responsibility for transport management and burial lies with Ama, a company that manages cemeteries on behalf of the city of Rome. Ama said in a statement that it had no contact with patients and followed the rules of the health system.

Italy’s privacy watchdog has opened an investigation into the burials, and Health Minister Roberto Speranza has been called to speak about the case in parliament.

Politicians on the left are pushing for a change in the law. A group of leftist councilors in the Lazio region proposed a new regional law on transport and burial of fetuses, with clear consent required from the woman. The current law is too ambiguous, said Councilor Marta Bonafoni: “It must not leave any space for doubt or uncertainty.”

But for some, the cemetery case has merely highlighted the need for more general reform. The obstacles to abortion have been tolerated because it is a woman’s problem, said Ercoli. “After 40 years the struggle is not over. We must be alert and we must be united.”