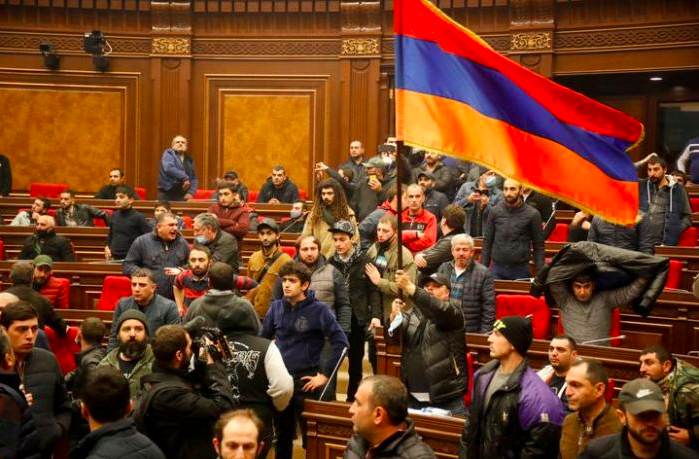 The Yerevan parliament stormed and violence outside the home of Prime Minister Pašinyan. Baku celebrates with victory parades. Turkey and Russia are moving towards the “Syrian model” of joint territorial control. 10 Iljušin-76 aircraft are ready to carry the troops of the “peacemakers”. In all, about 2000 soldiers will be deployed.

AsiaNews.it (11.11.2020) – https://bit.ly/32zeBcS – The peace agreement reached yesterday between Armenia and Azerbaijian, with Russian mediation, is being seen as a surrender by the Armenians, and a strategic victory for Turkey, which has obtained its goal: Access to the the South Caucasus as a protagonist. Victory parades took place in the streets of Baku, while the Armenians stormed their parliament and government buildings in Yerevan.

10 Iljušin-76 aircraft have already landed in Russia to transport the “peacemaker” troops. In all, about 2000 soldiers, 80 armoured vehicles and 380 means of transport with specialized technologies for territorial control will be deployed.

Azerbaijani President Ilham Aliev also stated that the peace mission in Nagorno Karabakh will be composed of mixed forces, Russian and Turkish. Turkey had engaged several foreign mercenaries in the conflict, ISIS fighters in Syria, who are likely to remain on the territory. Although Turkey did not take part directly in the negotiations, Ankara has appropriated victory. Turkish foreign minister Mevljut Chavushoglu has declared “Azerbaijan has achieved great success on the battlefield and at the negotiations table of the, and I wholeheartedly congratulate you on this success”.

The Armenian Prime Minister Nikol Pašinyan said he accepted the agreement “with great suffering”, even if in fact the Armenians still achieved a significant result, retaining a crucial part of the Armenian-majority territory recaptured already 20 years ago and declared “the Nagorno Karabakh Republic”, with the exclusion of the city of Shusha.

Pašinyan’s major efforts are aimed at persuading his compatriots that “this is not a defeat”, because the pacts signed were the only way to keep control over the city of Stepanakert and the Lachinsk corridor. “I kneel before our dead, and I bow to all our soldiers … with their sacrifice they have saved the Armenians of Artsakh,” the premier wrote on Facebook, using the Armenian name of Karabakh.

The status quo achieved is not the one indicated for some time in the OECD’s “Minsk agreements”, under the supervision of Russia, France and the United States, but the one established by Russia, which has taken all responsibility for the agreement upon itself, and which assigns a much larger territory to Azerbaijan than that of the Minsk text. The city of Shusha and its surroundings, moreover, had already been lost by the Armenians since November 5: this was revealed by the president of the Armenian republic of Nagorno Karabakh (Artsakh), Araik Arutjunyan, and on November 7 the Armenian forces had totally abandoned the city.

Armenians angry at the agreement attacked the president of parliament, Ararat Mirzoyan, who was beaten by demonstrators after pulling him out of the car he was trying to flee in. The residence of Prime Minister Pašinyan was also attacked and sacked; the prime minister of last year’s “flower revolution” is today overwhelmed by criticism from all political and social formations in the country, including the Apostolic Church of katholikos Karekin II. Pašinyan defended himself by claiming that he had to rush to the negotiating table, after “those who want my resignation had withdrawn from Shusha the previous days”.

However, the peace agreements appear rather fragile; Azerbaijani President Aliev has repeatedly stated that he wants to take back all of Nagorno Karabakh, and in all likelihood he will wait for the right moment to resume the conflict, as the signed pact lacks a long-term perspective. A new political crisis is also expected in Armenia, with the attempt to influence or replace Pašinyan. Turkey and Russia seem to concur on applying the “Syrian model” of joint control of the territory, where rather than peacekeeping forces, real armies will rule.