Algeria: Sentencing of Pastor Adds to Uptick in Persecution in Algeria 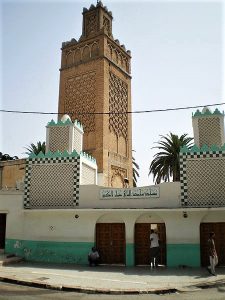 Morning Star News (12.03.2018) – http://bit.ly/2GvN4gg – In the latest of a rash of persecution incidents in Algeria, a judge on Thursday (March 8) sentenced a pastor to a fine and a suspended prison sentence under a law that prohibits causing Muslims to doubt their religion, sources said.

In Frenda, Tiaret Province, pastor Nordine B. was ordered to pay a fine of 100,000 dinars (US$868) and received a three-month suspended prison sentence, the pastor confirmed to Morning Star News in an email.

Prosecutors had sought a six-month prison sentence and a fine of 50,000 dinars (US$434), another Algerian pastor confirmed to Morning Star News in an email. His name is withheld for security reasons.

“The pastor of the church of Tiaret was convicted of proselytism,” the pastor said. “He will appeal, so the verdict is not final.”

Algerian News outlet Algerie Part last week reported a Christian leader as saying the charge against Pastor Nordine was ridiculous, as the only evidence police presented was the fact that he was carrying Christian books.

The charge was based on Algeria’s controversial Law 03/2006, commonly known as Law 06/03, according to Algerie Part. The prosecutor’s requested prison sentence and fine, like the judge’s actual prison sentence and fine, was less than that stipulated by the 2006 law, which calls for a prison term of two to five years and a fine of 500,000 to 1 million dinars (US$4,343 to US$8,687) for anyone who “incites, constrains, or utilizes means of seduction tending to convert a Muslim to another religion, or using for this purpose the institutions of education, health, social, cultural, or educational institutions, or other establishment, or financial advantage; or makes, stores or distributes printed documents or films or other audiovisual medium or means intended to undermine the faith of a Muslim.”

Christian leaders say the charge was unconstitutional, citing the Algerian constitution’s Article 42, which guarantees freedom of belief, opinion and worship.

“The situation for Christians here is very critical,” the unnamed pastor in Algeria told Morning Star News by email. “We ask, why this relentlessness of the authorities on us?”

The case follows several instances of harassment of churches and Christians in the past three months that has raised concerns of a government campaign against Christianity, according to advocacy group Middle East Concern (MEC).

In Oran Province in northwest Algeria, the unnamed church pastor told Morning Star News that three churches have been closed. On the pretext that they didn’t have state approval, police sealed shut a church in Oran city and a church in nearby El Ayaida on Feb. 27, he said, adding that another area church in Ain el-Turk was closed on Nov. 9.

“Officials gave us a period of three months to regularize our situation, but they did not respect this deadline,” the pastor told Morning Star News. “The same day I received the forms to file to register as an association, the police were ordered to seal the two places of worship in Oran city center and El Ayaida.”

Authorities later came to a site where members of the Oran city center church were worshipping and stopped the service, he said.

“We filed a letter of appeal at the level of provincial security services, and we informed them that the church registration file is ready,” he said. “It is expected that the judge will give the order for a general meeting, but so far there has been no response.”

A Christian-owned bookshop in Oran city also was forcibly closed in November, and police visited a church training center in Boudjemaa, in Kabylie Region, and stopped activities, MEC reported.

“The affected churches are all affiliated with the legally recognized Protestant Church of Algeria [l’Église Protestante d’Algérie, or EPA),” MEC reported. “EPA questions the motives behind the inspection visits and believes that the accusations leading to the church closures have been unfounded.”

The World Evangelical Alliance’s Religious Liberty Commission said in a press statement that Algerian authorities in November formed a committee from various agencies to inspect churches for compliance with safety regulations, but that it is also questioning whether churches have permits for religious activities.

“The committee has accordingly ordered several churches, two Bible schools, and a Christian-owned bookshop to close down,” the Feb. 26 statement read, adding that the restrictions have also led to an increase in arrests of Christians.

“We call on the government of Algeria to ensure that the religious freedom of Christians is safeguarded in accordance with international law,” said Godfrey Yogarajah, deputy secretary general of the WEA. “We also call on the government, in keeping with the country’s constitution, to take all steps necessary to guarantee the freedom of worship for all religious groups in the country.”

In December three Christians from Tizi Ouzou were arrested in Chlef, 200 kilometers (124 miles) northwest of Algiers, where they were to meet colleagues at a café, MEC reported.

“Police entered the café, found they were in possession of Christian literature, and took them to the police station, where they were investigated at length by the national gendarmerie,” MEC reported. “A local newspaper known for its hostility to Christians described the incident as a ‘foiled evangelism attempt,’ falsely accusing the Christians of working under the cover of humanitarian activities and of alluring young Muslims to convert by means of financial and travel inducements.”

The three visitors were released but could face proselytism charges, MEC said. That same third week of December, two churches in Kabylie Region’s Bejaia Province received a visit from officials from the municipality, the ministry of religious affairs, the fire brigade, the national gendarmerie and the intelligence department, according to MEC.

The officials told church leaders the visits were inspections for safety regulations. The two buildings are used by eight congregations.

In the southern Algerian town of Ouargla, another church received an order from the provincial governor to cease all religious activities following a building inspection on Dec. 14, MEC reported. Officials said the church lacked authorization to use the building for worship and failed to comply with safety requirements. They told church leaders to obtain permission from the ministry of religious affairs.

The officials said that worship activities at the church, which has been active for 10 years, can resume only three months after obtaining permission, according to MEC.

Algeria’s population of 35.4 million people is more than 97 percent Muslim and .28 percent Christian.

In December Algeria also deported a French Christian without explanation. Louis Martinez of the French Reformed Church had left Algeria on a trip and was returning on Dec. 13 when authorities stopped him at the Oran airport and deported him, according to MEC.

Martinez and his wife had lived in Algeria for several years and had just been issued a new residency permit valid for 10 years, according to MEC.

Manager of a private French-language school, Martinez was known as a close friend of a local church.

“The authorities gave no reason for his deportation,” MEC reported. “His wife was subsequently able to settle their family and business affairs in Algeria and has recently also left the country. Algerian church leaders note that this deportation is consistent with a wider pattern of denial of visas for church visitors, which seems to be part of a policy whereby the Algerian authorities are restricting the ability of Algerian churches to partner with outside entities.”

Algeria ranked 42nd on Christian support organization Open Doors’ 2018 World Watch List of the countries where it is most difficult to be a Christian.