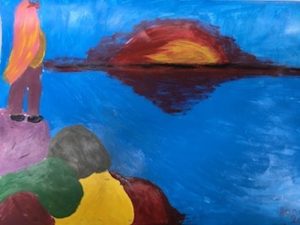 By Jade-Leigh Tenwick, Communications and Development Officer at SB OverSeas

This story is part of our child marriage series which aims to highlight this increasingly prevelant practice amongst the refugee community in Lebanon.

SB Overseas (31.05.2018) – This article tells the story of Ream, an eighteen year old who attends one of our SB OverSeas centre. SB OverSeas has three centres in Lebanon where we run education and empowerment programs.

Ream left Syria at the age of twelve shortly after the outbreak of the Syrian conflict. A conflict which led her not only to lose her home, but also her childhood and education.

Ream, along with her family, followed the same path as many other Syrians escaping the conflict to Lebanon. She was enthusiastic to start her life in Lebanon and continue her education. She dreamed of being a human rights lawyer, giving a voice to those who had none.

This dream did not last long. Registration requirements and safety concerns of her family thwarted her educational opportunities.

Left at home. Without routine. The monotony and the hopelessness of the situation began to erode at the once happy and ambitious child. Her mental health deteriorated. Her mother charged her with more responsibility in the household in a bid to lift her out of her depression. This was her existence for two years.

At the age of fourteen, Ream was told about her impending marriage to a family friend. This was her chance to start a new life. Excited for the wedding day, she dreamed about wearing her white dress. After an idyllic day, she was filled of hope for a new life with her husband. A husband nearly double her age.

This story follows the same narrative as the other stories we have heard. Cracks began to appear and her feelings of hope shrunk. They were unable to register the marriage as Ream was too young. This legal status had consequences for her the child she was bearing. Without legal status, the child would be born statelessness – a life without clear rights or legal status.

Their problems also extended to the husband’s family. Living in a small space caused tensions to heighten. She tried to ease this by shouldering more household responsibilities. This included not only household chores, but walking to retrieve water. Overwhelmed by the responsibilities and pregnancy, she would often find herself in tears.

With problems escalating, she felt more and more overwhelmed and asked for a divorce so she could return to her family. Her husband refused. He threatened her stating he would not register the marriage, renounce their child and marry another woman. The ramifications of these actions were sufficient to convince her to stay.

Things did not get better. Her husband began to beat her, sometimes daily, and she worried about the physical affect of the trauma on her unborn child. She fled her family to seek their support. Yet, they were not as supportive as she had hoped. With over 70% of Syrian refugees living below the poverty line in Lebanon, food is scare and hunger is rife. They told her to forget about her old family and to return to her new one.

Ream had to choose either to be vulnerable and alone on the streets or to return to her husband. She chose the latter. With her baby born, she had not only herself to worry about, but another human. With another mouth to feed, she was often hungry, barely able to provide for her child.

Her health deteriorated and her husband decided took her back to the family visiting her sporadically. After three months, her family decided it was time for her to fend for herself. Left out on the street, she begged her husband to look after her and her son. He rented a small room for her. This came at a cost. He appeared to only visit her when he wanted to have a target for his anger and frustration.

Her family realising the extent of the situation, took her back in. After three years of limbo, Ream is now trying to rebuild her life and find the girl who once dreamed of being a human rights lawyer. She comes to SB OverSeas centre four times a week and attends our courses. At our centre, she also speaks of her story with the other girls to raise awareness of her and many other girls’ experiences with child marriage.