CHINA: 89 Falun Gong practitioners sentenced for their faith between January and April 2020

Falun Gong, also known as Falun Dafa, is a spiritual practice centered on the principles of Truthfulness, Compassion, and Forbearance. Since the Chinese communist regime started persecuting the practice in July 1999, many practitioners have been subjected to arrest, imprisonment, torture, forced labor, and even organ harvesting.

The 89 sentenced practitioners are from 14 provinces and centrally-controlled municipalities. Liaoning Province topped the list with the most practitioners sentenced (15), followed by Hebei (14). The rest of the regions reported single-digit sentencing cases ranging from 1 to 9. Due to information blockade, especially during the coronavirus epidemic, the actual sentencing cases are expected to be higher. 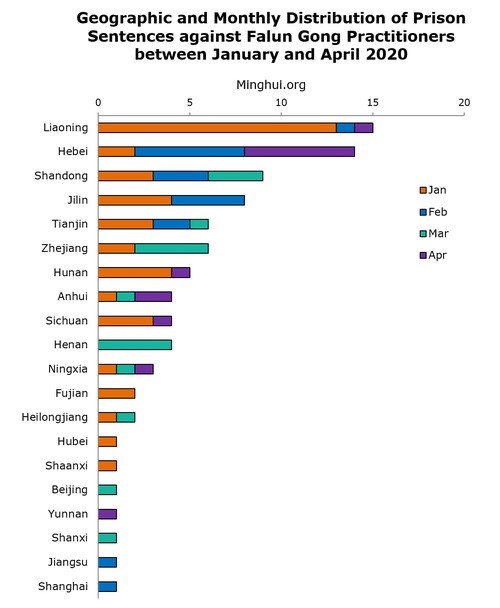 Terms as high as nine years were given out each month between January and March. The highest term in April was seven years, given to a 73-year-old woman. The average term for all 89 cases was 3.72 years. 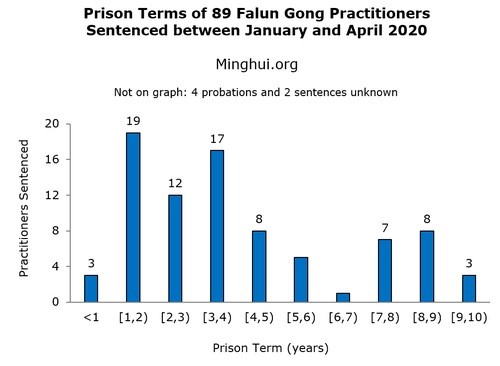 Most of the practitioners sentenced in April were women and three were in their 70s.

Several courts secretly sentenced a few practitioners without informing their lawyers. The practitioners’ families only found out about their sentencing when delivering clothes to them at the detention centers and realizing that they were no longer there.

A Suihua City, Heilongjiang Province resident, Ms. Song Hongwei was still monitored by the authorities after she was released on April 9, 2020, after serving a 1.5-year term. The police demanded that Ms. Song turn in her ID and promised to issue her a new one, probably in an attempt to flag her ID for more advanced surveillance.

Below is a snapshot of sentencing cases in April and newly confirmed cases in earlier months.

Ms. Gao’s ordeal started from a previous arrest on September 9, 2013. Although she was released on bail after the Baoding Detention Center refused to admit her due to her poor health, the police submitted her case to the Xinshi District Procuratorate without her knowledge.

Only when the prosecutor summoned her in January 2014 did she realize that she had been indicted for her faith.

Fearing being sentenced, Ms. Gao decided to go into hiding.

In early 2019, the Baoding Social Security Office suspended her retirement payments under orders from the police. The police also summoned her daughter to try to find her mother.

After monitoring her family for several months, the police found Ms. Gao’s address and arrested her on August 22, 2019.

Ms. Gao appeared in Gaoyang County Court on December 5, 2019. The judge recently informed her lawyer that she has been sentenced to seven years.

Ms. Gao appealed to Baoding City Intermediate Court soon after receiving the verdict. But an insider told her family not to pin too much hope on the appeal, as the verdict was actually determined by the intermediate court.

Tianjin Woman Secretly Sentenced to Six Years Without a Hearing

When Ms. Gao Yuming’s family tried to visit her in the Wuqing Detention Center in late April 2020, they were told that she has been sent to Tianjin Women’s prison to serve a six-year term for her faith in Falun Gong.

Ms. Gao’s sentencing came shortly after she was arrested on February 9, 2020. Prior to her latest arrest, Ms. Gao was targeted in a group arrest of 37 Falun Gong practitioners in Tianjin on December 28, 2017. Although she was released on bail on February 2, 2018, the police continued to harass her and threatened to sentence her to prison.

Fearing the persecution, Ms. Gao went into hiding, only to be arrested again a year later.

The local court reopened Ms. Gao Yuming’s case and swiftly sentenced her without following the legal procedure or notifying her family.

Ms. Gao was the eighth practitioner among those arrested in Tianjin on December 28, 2017, to have been sentenced. The longest term was 11 years, given to a dentist, Mr. Li Yongquan.

Hebei Woman Tried at Her Home and Sentenced to Four Years

A resident of Qinhuangdao City, Hebei Province was at home on April 6, 2020, when officers and staff members from the Haigang District Court broke in. The police restrained Ms. Yang Suhua’s son while the judge held a hearing in the case against her.

The court staff returned to Ms. Yang’s home on April 13 to deliver a verdict. She was sentenced to a four-year prison term and fined 2,000 yuan. She had ten days, between April 13 and 23, to file an appeal, and was scheduled to be imprisoned on April 24.

According to Ms. Yang’s family, the police have been harassing her during the past few years and the authorities hastily sentenced her in order to close her case from 2016.

Ms. Yang was arrested on August 29, 2016, after being reported for talking to people about Falun Gong. After the Qinhuangdao City Detention Center refused to admit her due to her poor health, the police released her and put her under house arrest.

Officers from the Duzhuang Police Station frequently called her and urged her to go to the police station to answer some questions in early 2017.

After Ms. Yang finally went to the police station a few weeks later, they took her to the Haigang District Procuratorate to sign her indictment file. Only then did Ms. Yang realize that the police had fabricated the interrogation record against her and submitted her case to the Procuratorate.

On March 14, 2017, two police officers and two staff members from the Procuratorate visited Ms. Yang at home and told her that her case had been forwarded to the court.

The police attempted to bring Ms. Yang to the court on the morning of May 10, 2017, but relented after finding that she wasn’t home.

Ms. Yang’s health began to decline as a result of the harassment and fear of being imprisoned. She was often in a delirious state and having difficulty walking.

The authorities continued the harassment and finally decided to sentence her in 2020, despite her health condition.

Woman in Her 70s Sentenced to Four Years

Ms. Geng Wenjing, in her 70s, was arrested on August 29, 2019, for passing out informational materials about Falun Gong. The police ransacked her home several times and held her at the Hengshui City Detention Center.

Ms. Geng, of Xinji City, Hebei Province, appeared in the Anping Court on January 17, 2020. The authorities didn’t inform her family of her indictment and court hearing. Her loved ones only learned of the trial when they went to the court themselves to inquire about her case.

Caregiver-Daughter Given Three Years of Prison for Her Faith, Parents in Their 80s Left Unattended

A Wuhu City, Anhui Province resident was recently sentenced to three years in Anhui Province Women’s Prison for practicing Falun Gong. Her parents in their 80s, who had relied on her for care, now struggle to fend for themselves.

Ms. Xu Fengliu, a 59-year-old herbalist, was arrested on May 28, 2018, for passing out informational materials about Falun Gong. She was beaten, force-fed and monitored around the clock when she was detained at Wuhu City Detention Center.

It remains to be investigated when she was tried and by which court.

Mr. Xu, a Huili County, Sichuan Province resident, was arrested on the evening of April 23, 2019. The police took him to different places the next day and took photos of him at each place. They then accused him of posting Falun Gong information across town.

Mr. Xu appeared in the Huili County Court on October 23, 2019. His lawyer entered a not-guilty plea for him, and he also testified in his own defense.

When Mr. Xu’s family contacted Judge Fu Jing to inquire about his case in February 2020, the judge said he had just received more materials from the prosecutor and that he was considering another hearing.

According to Mr. Xu’s lawyer, Chinese criminal law prohibits prosecutors from submitting additional evidence after the court hearing. He urged the judge not to consider such evidence and not to follow the Chinese Communist Party’s persecution policy against Falun Gong while deciding the verdict against Mr. Xu.

The judge never contacted the lawyer afterward. When Mr. Xu’s family went to the court to inquire about his case on April 25, 2020, the judge said that he had already sentenced Mr. Xu the week before. He didn’t offer more details and left in a hurry.

Mr. Xu’s family has filed an appeal with Liangshanzhou Intermediate Court on his behalf.

Ms. Shi Qiaoyun, a 77-year-old resident in Xiangtan County, Hunan Province, was sentenced to six months of house arrest for her faith in Falun Gong.

According to the verdict issued by the Yuhu District Court on April 21, 2020, Ms. Shi is prohibited from leaving home without police permission and communicating with others in person or by mail. She was also ordered to turn in her ID, including her passport and driver’s license, and has to show up at the local police station whenever she is summoned.

Ms. Shi was arrested on May 22, 2019, after being reported for distributing informational materials about Falun Gong.

The police searched her home around 11 p.m. on May 22 and verbally abused her. They confiscated three of her Falun Gong books.

The police harassed Ms. Shi on September 24 and 25, 2019, asking her what she was doing and looking around her residence. On the 25th, they arrested her and ransacked her home. She was taken to the hospital with her hands cuffed behind her back.

After Ms. Shi was found to have high blood pressure and a heart condition, the police released her and ordered the local village secretary to monitor her.

The police returned on September 28 and took Ms. Shi to Huashi Police Station, collected her fingerprints, and took pictures of her. She went home later that day.

Ms. Shi was taken to the Procuratorate on December 24, 2019, and told that she had been indicted. The Falun Gong materials confiscated from her home were used as evidence for the prosecution, with each page counting as one separate piece of evidence.

Two Sisters in Tianjin Given Heavy Terms for Their Faith

Two sisters in Tianjin were sentenced in January 2020 to heavy terms and fines for their faith in Falun Gong.

Ms. Cheng Guiying and Ms. Cheng Guijing were arrested on May 17, 2018, and sent to Nankai District Detention Center. Their Falun Gong books and related materials were confiscated.

The heavy terms were based on accusations that the sisters made phone calls to the public to spread information about the persecution of Falun Gong, and that they were “repeat offenders” due to their previous labor camp terms for practicing Falun Gong.

Ms. Cheng Guijing’s arrest left her parents-in-law, in their 80s, in deep distress and fear.

Shandong Woman Sentenced for Her Faith on Fabricated Evidence

Ms. Liu Xifang, a nursing mom in her 30s, was sentenced to two years and three months in March 2020, for her faith in Falun Gong. She has appealed the verdict.

Ms. Liu, of Jinan City, Shandong Province, was arrested on June 14, 2019, while staying at her mother’s house in Huimin County, also in Shandong Province. She had been reported for distributing materials about Falun Gong the day before.

Ms. Liu appeared in Huimin County Court in mid-January 2020. The judge didn’t allow her family to attend the hearing.

Ms. Liu was charged with “undermining law enforcement with a cult organization,” a standard pretext used by the authorities to criminalize Falun Gong practitioners. Her lawyer entered a not guilty plea for her and refuted the charges.

The prosecutor, Li Haijun, listed some Falun Gong materials found in a residential area in July 2019 as prosecution evidence against Ms. Liu.

The lawyer asked Li, “My client was arrested and sent to the Binzhou City Detention Center in June. Did the police take her to the residential area to distribute the materials in July?”

Full list of the 89 practitioners sentenced between January and April 2020 (PDF).