45% of Ukrainians will fall below actual poverty level in 2020: study 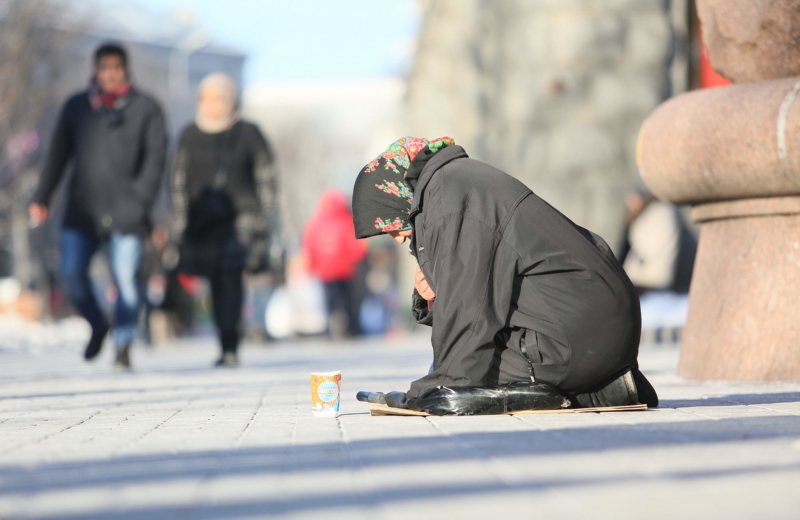 An elderly woman begging for money in central Kyiv, 2018. Photo by Oleg Petrasiuk

Kyiv Post (18.09.2020) – https://bit.ly/3hTa2z2 – Close to half of Ukrainians will experience poverty in 2020, according to a study by the M.V. Ptukha Institute of Demographics and Social Research.

Even though the study was published in June 2020, it only recently came to public attention.

The study defines poverty as one’s living conditions being below the actual minimum subsistence level, which varies between an average of Hr 3,237 and Hr 3,636 ($115-130) per person during the first nine months of 2019.

The “actual” minimum subsistence level defined by the study is much higher than the legally defined average of Hr 2,118 ($75) established in June.

The COVID-19 crisis reversed the last few years’ trend of stable or declining poverty, according to the research. By last year’s predictions, the poverty rate was supposed to be 31.2% in 2020.

Instead, it will be closer to 45%, which is more than 18 million Ukrainians. This is 6.5 percentage points higher than last year’s poverty rate of 38.5%. It also means a 17% increase in the total number of Ukrainians in poverty.

The year 2018 and the first three quarters of 2019 showed a decline in both absolute and relative poverty, meaning that fewer Ukrainians were poor and lower income Ukrainians began to experience better living standards. The institute expected the trend to continue this year.

“However, in 2020, events are unfolding in such a way that the achievements of the last three years may be wiped out entirely,” the research paper stated.

Lyudmila Cherenko, head of the institute’s living standards department, last week told Ukrainian Radio that the number of people living in poverty has increased by 2 million to 16.5 million Ukrainians just in the first quarter, even before the COVID-19 quarantine was fully implemented.

She also warned that the past few decades have seen a stagnation in income distribution, on top of a growing income gap.

According to the institute’s survey, 60% of respondents said they had financial losses – 38% had a decline in regular income, 16% lost income entirely and 14% lost their jobs. Households with multiple children have been hit the worst.

The results reflect May findings by the Ministry of Social Policy, which also estimated that the poverty rate will increase to 45% in 2020.